A Tale of Two Tunes 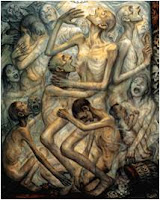 I picked up Disturbed’s new CD a few weeks ago and still listen to it whenever I drive around base or go into town. I’ve also put on the headphones while working on my laptop at night to catch nuances in the production. Though not quite as good as their previous release, Indestructable (2008), Asylum still delivers the goods: solid musicianship, a great sound, superb vocals, nice guitar riffs, good vocal melodies, thoughtful lyrics, and plenty of attitude. I’m tempted to comment on each song, but I don’t want to bore non-Disturbed fans. I would venture to say that only a quarter of my readership, at best, enjoy hard rock or metal.  For this reason I have something else in mind other than a CD review.
The sixth track, “Never Again,” is not necessarily my favorite song, but given its theme—the Holocaust—and my interest in genocide, it especially struck my fancy. It perhaps contains the most impressive instrumental break among the CD’s tracks, however. Anyway, I’m going to compare this song to another tune that explores this dark topic, Rush’s “Red Sector A,” which appeared on the band’s tenth studio release, Grace Under Pressure (1984). Incidentally, if anyone knows of another hard rock or metal song about the Holocaust, please let me know in a comment.
The only solid link between the two songs is the lyrical content. Musically the styles are different, in part because the bands come from different backgrounds and generations. Rush, a Canadian trio reaching its pinnacle in the Eighties, became an architect of progressive hard rock. The three members of the band seemed to incorporate a variety of styles and genres with each successive decade and yet somehow remain true do themselves and increase their fan base. Apart from Geddy Lee’s inimitable vocal style, “Red Sector A” is not representative of Rush’s trademark sound; at the same time it showcases the band’s penchant for experimentation. Disturbed, whose original members hail from the working-class neighborhoods of Chicago, is a metal band that has managed to carve out an original sound in a crowded, and perhaps dying, musical genre.  Led musically by guitarist and producer Dan Donegan, the quartet is almost always heavy and angry.  “Never Again” attacks the listener with an onslaught of distorted guitars and an angst-ridden voice. 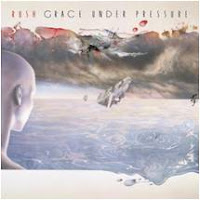 Ironically, “Red Sector A” is probably one of my favorite Rush songs. I say ironically because if memory serves it’s one of only a handful of tunes in the band’s vast repertoire in which Geddy Lee, one of the greatest rock bassists of all time, does not play bass guitar. Instead, the lower end is held by a pulsating keyboard sequencer. The keyboards and electronic drums give the tune a futuristic sound, which is fitting given the dystopian or even apocalyptic lyrics (which I’ll turn to shortly). When I listen to it I can’t help but think of the intriguing CD cover art that depicts a sci-fi scenario. The keyboards are good and the drums are superb, but ultimately the song’s power and emotional intensity hinge on the guitar work and vocals. The opening guitar chords convey a sense of desolation from the get-go and set the listener up for Lee's complementary vocals. This song also features one of Alex Lifeson’s most expressive guitar solos; the piercing harmonics at the beginning (more piercing in the live version, at any rate) and the subsequent chordal riffs, drenched in digital delay and executed with careful tremolo bar vibrato, seem to reach out from the dark depths of loneliness and fear. You can picture wretch souls, forsaken and forlorn, bouncing between hope and despair but weakened by fatigue and starvation.
Drummer Neil Peart, lyricist extraordinaire, is more poetic and abstract than Disturbed frontman David Draiman. Though the Holocaust is clearly in the backdrop of RSA, Peart wanted to convey a universal experience of inhumanity and suffering. For this purpose he doesn’t specify the Holocaust with the typical buzzwords like “Nazi” or “Auschwitz,” but the imagery is unmistakable. Other Rush songs probably do more justice to Peart’s literary sensibility, but the objective he evidently set for himself in this particular song was to convey despair and fear in simple phrasing.

Ragged lines of ragged grey
Skeletons, they shuffle away
Shouting guards and smoking guns
Will cut down the unlucky ones
Sickness to insanity, prayer to profanity
Days and weeks and months go by
Don't feel the hunger
Too weak to cry
Above all, the lyrics present the victims’ limited point of view. The captives don’t know what’s going on and cling to rumors of liberation. Survival is the name of the game. I find one line particularly touching:
For my father and my brother, it's too late
But I must help my mother stand up straight
For me, Lee’s voice on the last word, “straight,” in the second iteration of the line at the end, is a cri de coeur that packs an emotional wallop. We should mention here that his parents were Jewish refugees from Poland.

For those of you who are familiar with Disturbed, my description of “Never Again” will sound like business a usual for the band. A wall of guitar tracks and tight double-kick drumming bombard the listener.  Contrast this approach, by the way, with the "breathing spaces" in RSA.  A staple of Disturbed's tunes is Draiman’s voice contortions and grunts. In “Never Again” he starts out with a haunted battle cry, however, that sounds different from his usual bag of vocal tricks.  Draiman is Jewish, as music critics and bloggers have often pointed out—too often in my opinion.

The song is about bearing witness to crimes against humanity. The title and refrain, “Never Again,” is a phrase that resonates strongly with survivors of the Holocaust and others committed to the fight against genocide and oppression throughout the world. Whereas Peart gives us the victims’ myopic perspective, Draiman looks back in righteous anger as a survivor with a larger perspective. He delivers his lines, as is typical, in staccato fashion, as vocals and instrumentalists move tightly together like a hoplite phalanx.  The solo section is a slight departure from Disturbed's template, but those who have cut their teeth on Iron Maiden or Dream Theater will welcome the finger work and odd-time signatures.

In one line Draiman addresses Holocaust denial, an unfortunate phenomenon that has the potential to spread like wildfire as the last survivors pass away and anti-Semitism continues unabated in the present century.  You dare to tell me that there never was a holocaust, You think that history will leave their memory lost. The refrain of the song is powerful stuff: All that I have left inside is, A soul that's filled with pride, I tell you never again. Needless to say, seeing the lyrics in print without their execution in a musical context doesn’t do them justice. The kicker comes at the very end:
For the countless souls who died
Their voices fill this night
Sing with me, never again
They aren't lost, you see
The truth will live in me
Believe me, never again 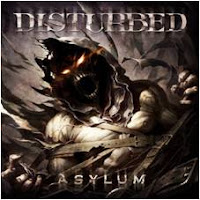 Whereas the abstract lyrics of RSA convey a universal experience of victimhood under dire circumstances, Draiman’s explicit mention of Hitler, the Holocaust, and the “Nazi war machine” root "Never Again" specifically in the mass murder of Jews during World War II.  RSA, I would say, is musical art in the sense that the music, lyrics, and vocals contribute to the central motif.  “Never Again” isn’t quite on this level; it’s just a kick-ass song with meaningful lyrics!  The subject of the Holocaust is not one to take lightly.  Some seventy years ago millions of hapless souls suffered almost beyond belief at the cruel hands of evil tormentors committed to their annihilation. Writing a rock song about this horror is tricky business.  Yet these two tunes manage to tell a tale of woe in a dramatic and responsible way.
Posted by Der Viator at 4:18 PM