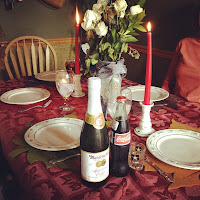 The Viator family had a wonderful Thanksgiving, so thanks for asking.  Like most nuclear American families, we’ve developed our own holiday tradition over the years that somehow works for us.  It usually consists of me getting drunk off Jack Daniel's in the early afternoon and making odd, inappropriate comments like, “Peter’s [our cat’s] anus tastes weird today,” while the girls bicker over which show they want to watch on the computer downstairs.  The pièce de résistance, of course, involves us assembling at the dinner table to stuff our pieholes with feedbags like there’s no tomorrow.  Erika, the eldest daughter, made a tongue-in-cheek remark about “Hatesgiving,” after an initial ruckus at the table involving my wife and Monika, the youngest daughter, over the use of the cellphone at the dinner table.   I shot Erika a disapproving look for such a remark, totally perplexed as to how one of my brood could depict things so negatively.  She didn’t take me too seriously, however, what with gravy dripping down my bibless shirt and alcohol breath so pungent that you could have blown up our house by just lighting a match.  After the meal we had fun as a family picking some of our favorite Eighties pop tunes on YouTube.

About an hour later we went to see a movie at an upscale theater, largely because my wife wanted to be able to sip coffee during the feature.  Whateva.  My wife and three daughters saw the latest release in the Twilight franchise, “Breaking Wind,” or something to this effect.  Figuring that the movie would be a disappointment after reading the books (though I haven’t read the books), I opted to see a Clint Eastwood movie called “J. Edgar,” about the founding FBI director and starring Leonardo DiCaprio,  in an adjacent theater all by my lonesome.  I enjoyed the film.  DiCaprio is clearly making his mark, along with, say, Matt Damon, as one of the best American actors of his generation.  It’s always interesting to see how a filmmaker translates the biography of a real person in such a way as to tell a good story without sacrificing the historical credibility.  Clearly, Eastwood based his film on biographies and poetic license.  To be sure, he took liberties for dramatic purposes, but, though a historian by training, I’m understanding of such artistic decisions.  I'd like to think that most educated people can use critical thinking skills and tap into some cultural literacy in order to distinguish truth from fiction.  I mean, I’d put more stock in an Eastwood film, say, than something from Oliver Stone, who has produced a few great films but is not exactly an honest broker when it comes to social commentary.
Just as the ending credits went up, a lady in her fifties started yelling, “This is bullshit,” over and over, as she stormed out of the theater.  I was surprised that everyone was so reserved about this rude behavior.  As she was leaving the theater, I yelled out, “Keep it to yourself, lady.”  I regret now that I did not say what had occurred to me shortly thereafter: “Shut the fuck up, asshole, or I’ll smack the living shit out of your rude ass!”  Had I said these words, I would have quickly assured everyone sitting in the theater that I’m not a whacko, but that enough was enough.  I don’t know if she was a lefty who was unhappy that the film humanized J. Edgar Hoover, perhaps Darth Vader to civil liberty types, or whether she was a right-winger, unhappy that the film portrayed Hoover as a homosexual.  Here’s the thing: I don’t give a rat’s ass what her political viewpoint is, whether it matches or diverges from my own.  If you’re gonna spew your crap in a public theater like that, you’ll have Der Viator on your ass.  Why must there be such hate on an otherwise pleasant Thanksgiving late afternoon?  I dunno...........Where's my bottle of Jack?
Posted by Der Viator at 2:15 PM

Most people who meet me for the first time end up concluding that I’m either gay or a drug addict.  I don’t know for sure why this is the case, but I suspect their misperception stems from my unconventional behavior.  One thing I do know for sure is that people are quick to judge from outward appearances.  Not me, though, for I’m different.  I make judgments about a person’s character and overall worth to the human species based upon limited contact and off-the-cuff assessment, but I’m usually correct in my perception.  Anyway, I was browsing for books in the gay and lesbian section of Barnes & Noble the other day.  I’m teaching a course on epidemics at the University of Mantua and am looking for some interesting stories about AIDS.  Suddenly it occurred to me, like one of those magical epiphanies everyone wishes for, that I’d been standing in front of the gay and lesbian section for the last ten minutes and I didn’t care.  Finally, I crossed, for me, the final frontier of not caring, and it feels liberating, almost as if I’ve come out of the closet, which I did, by the way, last year when I opened up about my homosexuality.
Posted by Der Viator at 2:58 PM 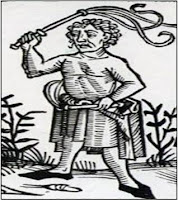 I once met a man who would beat himself silly every time he passed gas.  As the stench would rise, so would his resolve to make his own contribution, however small, toward righting the wrongs of this world; with grim face and leather whip, he would chastise his body, if not his soul, for having unleashed miasmatic vapors into the world.  In his tortured, guild-ridden mind, it was as if each blow, the ripping away of his surface flesh with the cat o' nine tails, would somehow cleanse the air, somehow restore paradise lost.  Alas!  He was but a fool, for that which has been unleashed to the world cannot be taken back.  Being a simpleton and a peasant at heart, this would-be Destroyer of Farts foolishly thought he could find redemption by chastising his flesh after each release of his foul pestilence.  Before you judge this man so readily, you should know that I am that man, the Flatulent Flagellant, and I don't take kindly to your haughty scowl.
Posted by Der Viator at 3:20 PM 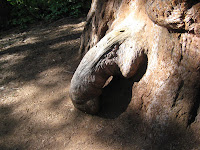 My friends and I visited the Big Tree Grove of Calveras County (California) this past July.  It was a quite a treat to see the immense sequoias, especially the Abraham Lincoln, which is pictured here.  Whenever I’m feeling inadequate in my life, I think of Lincoln, someone who had the balls to lead the country through its worst trials and tribulations.  Sure enough, he had personal issues, such as bouts with depression and he suspended civil liberties during the War, but you have to look at the whole package.
Posted by Der Viator at 8:43 PM