A Day of Remembrance

Nearly forty years after her horrific experiences in the Syrian Desert, Vergeen had the blue tattoos on her face finally removed.  If anyone has lived through hell on this earth, surely it was she.  If evil is something real and palpable, surely she experienced and felt it.  The thirteen-year-old girl lost more than her innocence in 1915, and her story is similar to thousands of other hapless Armenians living in the heart of the Ottoman Empire during World War I.

Vergeen Kalendarian was growing up in Kayseri, a town in central Anatolia, when Turkish soldiers evacuated the area, forcing the Armenian occupants there and elsewhere on a death march.  Males of a fighting age had no hope in hell, though Turkish gendarmes, Kurdish death squads, and desert Arabs weren’t averse to slaughtering babies and children along the way.  One might avoid death by feigning a conversion to Islam, but there was no guarantee.  The pretty girls might escape murder as slaves or concubines in a harem.  Vergeen and her mother managed to stay alive, thanks largely to the life insurance policy that Vergeen’s father took out before he died of accidental blood poisoning a few years before the War.  Still, they were heading for slaughter without much chance of survival.  The only way around a gruesome death was to become the servant of Bedouins.  Vergeen didn’t really have much of a choice, as Bedouins abducted her and soon killed her mother.

Until her escape about a year later, Vergeen suffered rape at the hands of the sheik’s brother, ill-treatment by the man’s wife, and a life of drudgery and hateful looks.  She found refuge among kind strangers working at a Railroad Company involved in the Berlin-Bagdad line so important for German-Turkish relations in those days.  Later she worked as a nurse for a military hospital in Aleppo after a prospective marriage with a Syrian accountant with the railroad did not pan out.

At the end of 1920, Vergeen found herself an immigrant on Ellis Island in New York waiting for clearance to join her fiancé who was then living in Milwaukee, Wisconsin.  Armen Meghrouni had been her betrothed since she was eight years old, but war and genocide got in the way.  He had pursued business interests in the United States before he joined the U.S. military.  Now he was pursuing a law degree at Marquette University.  Worried about her tattooed chin and the sexual abuse she had experienced, Vergeen wondered if Armen would accept her.  Would she return forlorn to the Middle East?  Her step-uncle Parsegh in Cairo had warned her that she wouldn’t find refuge in America.  Would she have to face him?

As it turned out, her worries were all for naught.  “You don’t have to hide those marks from me,” Armen assured her, “I will always regard those marks as symbols of your valor and honor.”  Though all of her family members were now dead, the young woman found an ersatz home in America.  She became Virginia Meghrouni and ultimately settled in Pasadena, California until she died in 1975.  She had asked her best friend’s daughter to edit and publish her story: Vergeen: A Survivor of the Armenian Genocide (1996).

Today is April 24, a controversial date.  It need not be.  For years our legislative branch has been debating the verbiage of the “Armenian Genocide Resolution” so that on this day each year the President of the United States can recognize the 1915 slaughter as a bone fide genocide committed by Ottoman Turks.  The controversy involves the Republic of Turkey, a strategic partner of the United States, adamantly denying that what happened in 1915 was a genocide.  Article 301 of the Turkish Penal Code in fact makes such a claim a jailable offense, as novelists, historians, journalists, and others have discovered.  Turkey has been an ally of the United States for decades, even if the relationship has been strained since the Iraq War, and the Republic plays a key role in the region.  Defense contracts and military bases are at stake should U.S. legislators sign off on any statement that uses the word genocide and specifies the perpetrators.  However, such diplomatic niceties are lost on the descendants of those who like Vergeen’s family were looted, abducted, raped, sadistically tortured, murdered, and left to starve in the Syrian Desert.

Additionally, the U.S. government finds itself in the peculiar position of denying the first large-scale humanitarian efforts in its history, as the American government and private charity groups came to the aid of “starving Armenians” a century ago.  As Michael Bobelian writes in his book Children of Armenia: A Forgotten Genocide and the Century-Long Struggle for Justice (Simon & Schuster, 2009): “The Armenian issue always placed the American government in a bind, pitting its inveterate streaks of realpolitik and humanitarianism against each other.”  Former Senator Bob Dole, who fought the good fight in the 1990s, gets the last word: “Maybe we can redeem ourselves a bit today by letting the world know that we do not always support the rich and the powerful and those with the most lobbyists.  Sometimes we judge right from wrong.”
Posted by Der Viator at 5:36 PM

Melencolia I and Early Modern Europe 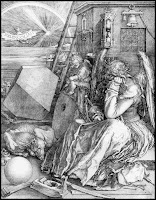 My favorite artist of all time, Albrecht Dürer, engraved the image above in 1514.  Art critics have debated the exact meaning of the winged Melancholia and the other objects in the scene.  It’s likely, though, that Dürer wanted to convey the melancholy that results when human ingenuity and creativity, when our efforts to explore the mysteries of the universe, are stifled by our intellectual insufficiency and the constraints of time.  Dürer is working with certain motifs of his era.  The theory of the temperaments, based upon a pseudo-medical theory stemming back to Galen, is at work here, as is the purported astrological influence of Saturn.  This engraving, I think, visually represents both the potential and limitations of early modern Europe (1500-1800).  The disconsolate figure of Melancholia sits wide-eyed amidst objects of science lying about in disarray around her.  The sea looms in the distance, as if teasing her with unexplored riches beyond the horizon.  Likewise, people of the early modern era were striving to make sense of a new world thrust upon them in a relatively short time span.  Perhaps a number of us have sat in saturnine contemplation along a desolate seashore.  We no doubt share some of the same frustrations, concerns and hopes as did Dürer, his Melancholia, and people of early modern Europe in general.
Posted by Der Viator at 9:43 AM

Burning Down the Tofu Garden 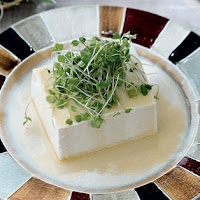 To all my vegan readers, I say: What the hell?  I’ve been on a vegan diet for the past three weeks.  Now I have to go to co-ops for my food, and they won’t even let me in there unless I’m sporting Birkenstock sandals and a Karl Marx t-shirt.  So now I have to change my entire wardrobe?   All for what?  Just because I want to buy that overpriced barley almond salad?  Come on!  Speaking of expensive: I’ve been reduced to those rich white people at Whole Foods who insouciantly plop organic mangos and a carton of soy milk into their cart, a privilege not afforded the poor and minorities in our country, let alone the poor saps in developing countries who are lucky if they can fish a muskrat out of the swamp for din-din.  Yeah, like those shoppers I return home smug with my expensively healthy crackers and bananas, put on the news, and sit on the couch indignant about the government’s “hawkish” and “right-wing” policies abroad, that is, the U.S. imperium that allows us to live so high on the hog at the expense of the guy with the muskrat.  Fortunately my veganism is temporary.  Just remember, tofu eaters, you’re part of the problem, not the solution!
Okay, so that’s the absurd lifestyle I’ve had to adopt these days, and I didn’t mention the lip service I have to pay to the New Age when I’m around the extreme ones, as if I’m perennially stuck in 1978.  Now back to the food.  Being a vegan is being condemned to an eternal salad without the real meal to follow, and you’re forced to live a life of longing and dissatisfaction, as if you're an inmate in a penal colony looking over the fence at an adjacent dairy farm.  Am I right or am I right?  It’s all about using spices, you say?  Spice THIS!  Okay?  Spice THIS!  If God wanted us to just eat grass and smoke pot, He in his loving Providence wouldn’t have given his children such delights as the Swiss cheese omelet and the Western Bacon cheeseburger.  Look, I’m just saying that I don’t want to be Donald Sutherland in Invasion of the Body Snatchers, okay?  I spit out things like “harmonic convergence” and “Marx actually had it right” so they won’t identify me as a human being with independent thoughts.  Let’s call a spade a spade, huh?  A plant-based diet sucks, and rather than affirm vegan food as being absolutely delicious, like a believer who extolls his faith so much you get the feeling he’s simply fighting off doubt, let’s be honest.
Posted by Der Viator at 4:37 PM

April is one of my favorite months of the year, but this day, April 10, is perhaps my least favorite.  Why?  Without fail I get a visit from an old friend, Cal Torrance, who for whatever reason feels an obligation to discuss with me unpleasant realities of life such as mortality, missed opportunities, regrets, and the ravages of time.  Each year Mr. Torrance’s countenance seems to mirror the topics under discussion.  His beard is a bit greyer, his tone more skeptical.  For the most part I’ve learned to ignore him when he comes a-calling, but today I had enough of his sourpuss shenanigans.  Here’s what I told him:  “Get thee behind me, Mr. Torrance, ye harbinger of degradation, ye bringer of morbid tidings.  It doesn’t matter whether I’m 19 or 65, I’m going to live life with a youthful mind and a healthy body.”  Did I scare him off for good this time?  No.  He’ll be back next year, or at least I hope so.
Posted by Der Viator at 4:05 PM

My Father is Gay, My Mother a Lesbian

My father is gay and my mother is a lesbian.  I don’t understand how I came to be, given this strange parentage, but I suspect my parents pretended to live a traditional life for the sake of appearances, what with homosexuality condemned in that era.  So I was the product of a lie, I guess you could say.  They eventually went their separate ways, each finding the love they had truly sought their whole life in the arms of someone of their same sex.  My parents, to their credit, didn’t divorce until I graduated from high school.  For those of you wondering, I had a happy childhood and I live a healthy, fulfilling life today.  For full disclosure, I'm a monorchid, which means I have only one testicle, like Hitler, but this physical disability has nothing to do with my parents being gay and lesbian respectively.  (On a side note, my cat is also a monorchid.  Talk about coincidence!)  If anything, these life experiences and physical challenges have made me a stronger person.
Posted by Der Viator at 8:16 PM