I readily admit that there are a lot of things in this life I don’t know about, and when it comes to “rulers of the darkness of this world” and “spiritual wickedness in high places,” to quote Ephesians 6, one must exercise particular caution before making a judgment.  But of this I am most assured: Satan entered my house last night in the form of peanut butter.   I Scheiß you not, my friend!  I’m not entirely sure if the devil assumed the shape of peanut butter or was simply inside the jar of peanut butter in some fashion or another.  And if he did assume the shape, did he merely give the appearance of peanut butter or did he somehow become one with the peanut butter.  I’ll let theologians and demonologists quibble over Satan’s presence, whether his essence was consubstantial with the peanuts and oil or whether it was occupying a particular space. 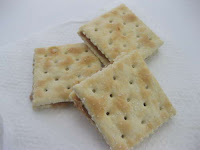 How do I know Satan was here, you ask?  Exhibit A: Satan is called the tempter in the Bible, and that jar of peanut butter tempted me beyond what I could bear.  Just like when he tempted Jesus to rule the kingdoms of the world, so the devil enticed me with that extra crunchy delight after struggling for weeks so diligently with my vegan diet.  Exhibit B: The Bible says that Lucifer can appear as an angel of light.  I easily spotted that jar of peanut butter when I got home from work late last night, around 1:00 or so, because it was on the kitchen counter right under the stove hood light that my daughter must have left on.  Let me tell you, it shone like a beacon in the darkness, and I just couldn’t resist.  The Great Deceiver had me right where he wanted me.  I was a moth drawn to the light, a helpless insect caught in the spider’s lair.  Satan’s minions in the form of saltine crackers also had a role to play in this most sinister conspiracy hatched within the confines of hell and unleashed in the witching hour.  Those demons joined their dark master to taunt me with the pleasures of the world.

We have a small laundry room in our basement and I used to tell my children it was the “red room,” like the freaky, evil storage space in Amityville Horror.  I don’t joke about stuff like that anymore, for I have seen evil incarnate in this house: peanut butter and crackers.  I tried to slay the fiend and his minions with a glass of nonfat milk, or at least lessen the effect of his black wiles upon me; but it was no use.  The damage was done: I saw evidence of the devil's handiwork as I stood naked from the waist up in front of the mirror this morning.
Posted by Der Viator at 8:47 PM 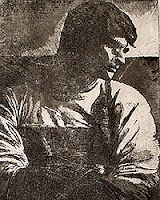 A million murders were swirling inside Darren’s head, countless victims of a young man’s intense dreams, but no one would likely have ever known about his secret life had a craniotomy to remove an abnormal growth on his brain not opened the contents of his macabre mind.  It’s as if the demons spilled out of him and retreated to the corners of the surgery room to await orders.  Sure enough, about six weeks later, after he recovered from the operation, Darren, a computer programmer by day and visionary by night, set aside his laptop, grabbed weapons he had stored in a locked crate in the garage, and went on a rampage one sunny Saturday afternoon, killing everyone within a hundred-yard radius of his condo: about thirteen people to be exact, including two infants in a double stroller.  He had had visions of an apocalypse and himself as an avenging angel of darkness, with blood literally flowing in the gutters and fiery-eyed vultures feasting upon a mountain of rotting corpses.

Darren was a romantic who fell in love, not with an idea, much less a woman, but with an abiding image that had captivated him since childhood.  His love affair ended, as it were, when he ran back into his condo upon hearing sirens and fired a glock pistol into the roof of his mouth.  A SWAT team found him on his bed, with a fatal gun wound to the head, part of his brain splattered on the bedroom walls which were largely covered by posters depicting dark scenes of his imagining.  Some people believe that heaven is the fulfillment of your greatest pleasures, a metaphysical place where you can indulge the desires of your heart from everlasting to everlasting.  Perhaps Darren, or his spirit at least, sits astride a sanguinary mass of severed heads and sawed-off torsos even as we speak, committing a million murders with sadistic glee.
Posted by Der Viator at 9:19 AM

My cats follow me wherever I go, at least whenever they can.  First off, they sleep in my bed.  Trust me. I don’t bring them to bed with me.  That’s the last thing I need: three warm furry creatures on a hot summer night locked in an interspecies snuggle fest, jostling around and leaving me confused as to where their tail ends and my arm begins.  When I go to the basement to play my keyboards, they anticipate me, as I am a creature of habit; the sons of bitches have already parked their oft-licked asses on my expensive sound equipment looking bored out of their gourd as I come down the stairs.  If I walk to the shopping mall from my house, they’ll tag along, like they're my posse or something.  It’s embarrassing.  Who wants to be known as “Cat Boy”?  Not me.  I'd rather be called something more manly like "Shark Man" or "Dog Warrior."

Yesterday I was at Caribou Coffee enjoying a latte macchiato and discussing the upcoming fall semester with a literature professor and college administrator, Marcia and Josh.  We look outside through the glass wall and see three cats staring in at us.  "Would you look at that?" Marcia says with a chuckle.  I didn't acknowledge my four-legged friends and  most certainly didn't want to address them in any way.  My colleagues thought it odd that I didn't see the cats crouched on the grass with their arms folded up against their chests less than a foot away from us, a fact that became all the more glaring when those persistent pussies started to rub their bodies up against the glass.  "You really don't see them, Der?" asks Josh with a puzzled look on his face.  "You don't see the lion country safari going on out there right now?  Really?  You don't see any of that?"  I just didn't want to deal with it, you know?  I responded rather sternly, I must admit: "No, I do not see them!"  I don't think I succeeded in warding off their suspicion that somehow those three furballs and I are intimately connected.  Anyway, I didn’t realize felines are so frickin’ gregarious, for cryin' out loud!  I thought they like to do their own thing.  I was under the impression that they were individualist creatures like me, but no: they follow me wherever I go.  Fuckers.
Posted by Der Viator at 10:37 AM