Reveries of a Solitary Mocker 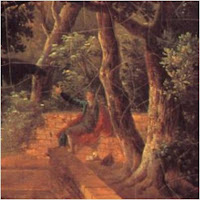 I find myself alone in a southern city on a four-day weekend. Whatever one might say about the military, one thing’s for sure: they don’t mess around when it comes to vacation time. Even before all services close down, these federal employees, both uniformed and civilian, tune out and avoid responsibility like the plague on a Thursday afternoon. I had a series of briefings from top brass yesterday, and judging from offhanded comments their heads seemed more focused on the coming weekend than whatever it was they were babbling about in the classroom. To be sure, my classmates had already set their sights on getting wasted in the historic downtown district of Charleston, sunning themselves at Myrtle Beach, attending the University of South Carolina football game, or engaging in some other form of debauchery
So I float around the town like a wraith seeking solace in solitude.  Well, I'm not out in the woods, so I'll settle on anonymity. Yesterday I resolved to complete some tasks and errands these next few days to prepare me for the coming weeks of training; yet I know how easily I can fall into a complacent default mode that consists of little more than working out, reading, thinking, and trying to avoid thinking. Alas! Thinking has reared its ugly head again and like always its melancholy friend, contemplation, is not far behind. Contemplation is fine in and of itself, but it inevitably leads me to worry about the future. I’m currently thinking through some life options that would presumably, and hopefully, better my financial situation and facilitate familial obligations. I’ve almost given up entirely on an academic career and am poised to leave the Army Reserve for active duty. Circumstances this fall will help me make a decision.

Every day is a struggle. Thank God or fate that I wasn’t born in a place like Congo or Burma, suffering from or perpetrating genocide and mass rape. My life in the good ‘ol US of A is splendid by comparison. Yet I greet each morning with a set of fists and a healthy suspicion toward those outside my inner circle, including the smiling barista who moments ago handed me an iced Venti Americano so full of ice that I ended up paying for less than half a cup.  History and the news are daily reminders that the species known as Homo sapiens is man’s most formidable enemy.  (Case in point: Seventy-one years to this day, September 3, Britain and France declared war on Nazi Germany.)  Nobody's here to give me a break, lend a helping hand, or give me an opportunity.  I got it.  Self-reliance is not a new lesson for me.  It keeps strangers at arm's length and gives me an appreciation for the hard truths of the human condition.

Perhaps it’s my lot in life to be that which I despise: a self-centered creature full of self-doubt and sometimes even self-pity. Have I become Rousseau? In his little book Les Rêveries du promeneur solitaire (Reveries of a Solitary Walker) the French philosopher expressed his feeling of isolation and alienation as he found repose in the beauty of nature. I used to like Rousseau, figuring that he was a kindred melancholy soul; now I see him as an egotistical ass with a thin skin. I prefer the other great French thinker of the 18th century, Voltaire, who used wit and mockery as a weapon to laugh his way through the injustice and evil of his day.
Posted by Der Viator at 12:06 PM