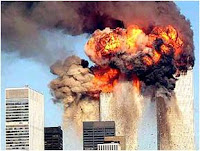 I’m watching the “Ground Zero” ceremony and President Obama’s memorial speech at the Pentagon on TV. We all remember what we were doing on that fateful Tuesday morning. I was teaching a Western civilization course at a university campus. Clamor and commotion broke out in the hallways. I think a couple of students popped into the room and mentioned a disaster or attack occurring in New York, but I was weary of sensationalism and didn’t dismiss my class early. Later in the staff lounge I watched in horror footage of the planes zooming into the twin towers.
This one highly-coordinated act of mass murder has affected all of us, mostly those who lost loved ones in the World Trade Center, the Pentagon, or a field in Pennsylvania. From the perspective of asymmetrical warfare, it was a brilliant attack, carefully conceived and far-reaching in its impact. Our military and the security industry have changed dramatically. Our economy has suffered.  The act emboldened Islamist radicals throughout the world.  We’ve been fighting abroad ever since, and these conflicts have served to accentuate our bipolar political culture at home. Perhaps most of all, 911 has gotten under our collective skin, as we Americans no longer feel invincible. Two oceans on our flanks can no longer protect us from those determined to hurt us physically or to destroy the ideals for which we claim to stand.
Al-Qaeda’s attack has changed my life in one way or another. I joined the U.S. Army as a belated response to 911, acquiring a new set of skills and racking up some experiences I would never otherwise have had. And while I had a mild interest in the Middle East prior to the attack, my knowledge of the culture and history of this part of the world has increased dramatically through voracious reading. By no means an expert, I’ve nonetheless had the opportunity to teach courses and seminars on the Middle East in Afghanistan and here in the states.

We're not out of the woods yet; we still face a nebulous enemy bent on our destruction.  The war in Afghanistan, as necessary as I believe it is, has produced no lasting peace.  We've pulled combat troops out of Iraq and plan to bring the rest of our 50,000 soldiers home next July.  Unfortunately we'll be back one of these days.  I hate to employ a cliché, but our freedom and culture come only at a price. In the best of all possible worlds we human beings would live in peace and harmony. Xenophobia and a sum-zero game of ethno-cultural domination would not exist. But reality, not a sanguine ideology, must be our guide. Military strength and firm political resolve are the sine non qua of liberty. Don’t listen to the Neville Chamberlains and Jimmy Carters of the world; there are forces out there that we must destroy. Be mindful of our democratic values, but not at the expense of our physical safety. I think of Christopher Hitchens’ brilliant response to a critic in his audience who was spouting far-left drivel about the evil American empire: “You ought to be ashamed for sneering at people who guard you while you sleep.”  (An atheist and self-confessed ex-Trotskyite, Hitchens is no Republican or "neocon.")

Just because the United States has done some bad things here and there doesn't make us the root of all problems in the world, as some on the far left seem to think.  Just because we're in a struggle against terrorists doesn't mean we're hell-bent on destroying Islam.  I'm in the fight to protect my hearth, home, and culture.  If you're a peacenik on some misguided crusade to save the world or a pacifist who really just wants to spew hateful partisan rhetoric, get out of my way.  Move to Afghanistan and submit yourself to Sharia law, if you want, but stay out of my way.
Posted by Der Viator at 8:51 AM