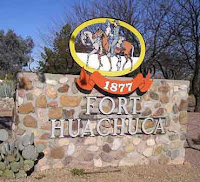 Fort Huachuca is situated in the high desert a ninety-minute drive southeast of Tucson. I spent four months there for AIT, or Advance Army Training, in order to become a military intelligence analyst. Honestly, those days were some of the best of my life in recent memory, the only downside of course was being separated from the family. I fell in love with the climate and the landscape. I was in great shape. I relished my leadership role. The classroom instruction was tedious but still rewarding. The guys and gals I worked alongside were for the most part wonderful.  Our drill sergeants were awesome.  I managed to squeeze in plenty of books. The food was superb. I got some downtime alone on most weekends. And with my top security clearance and training, the future looked bright.
After graduation from basic training and a couple of precious days reunited with my family at Fort Leonard Wood, the Army bused those recruits who were to be trained as either an intelligence analyst or interrogator a day later. We arrived at Fort Huachuca at the beginning of August, 2005. Huachuca is a Chiricahua Apache word meaning “thunder storm.” The fort commands a spectacular view of desert grasslands and mountains. Small wonder the U.S. Army used the site as a base for its ethnic cleansing campaign against the Apaches back in 1877. I fondly recall running on the track and looking across the breathtaking vista.
Programmed from basic training to watch our every step, we took a few days to accustom ourselves to some of the liberties we hadn’t known for the past three months. The drill sergeants were nicer and we had fewer restrictions. They in fact lightened up on some of the restrictions as time went on. For instance, they first required us to hand over our cell phones. I remember placing mine in a Ziploc bag and burying it in a box of detergent. The company commander and a few drill sergeants decided that we should be treated like adults, however. Imagine that? So I didn’t have to go through these precautions by the third week or so!
After about the first two weeks I became the "platoon guide," responsible for about one hundred soldiers. We went by the name Bushmasters, as all of the platoons took on the theme of a deadly snake. The usual day involved getting up anywhere between 4:30 and 5 in the morning to line up for formation and march off for physical training at a particular site. After morning chow and showers, we'd form up again next to the company headquarters building and march off yet again to the classrooms. I had become quite skilled at marching cadences as the platoon guide, and I was known for making up lines here and there.
The classroom instruction was long and tedious. We’d go over some material at the beginning and then apply it. This usually involved pouring over maps and plotting various coordinates and military symbols. We learned intellgience nomenclature and procedure and the proper way of conducting an intelligence briefing. The instructors, like just about everyone else except our drill sergeants, were government contractors, almost all of whom had been in the Army. We had one instructor who informed us that Al-Qaeda is a Shiite organization. I lookd at a couple of my buddies, a guy in his late thirties who had a master’s degree in history and a twenty-something sharp fellow with a BA from the University of Kansasand. We looked on with astonishment that this makeshift instructor would teach us something so wrong, something so key to understanding conflict in the Middle East today! Oh well.

Most of the instruction focused on “Soviet doctrine.” That is, we learned how to conduct an intelligence operation as if we were fighting a conventional war like the in the days of yore. Unless we’re going to war against China over Taiwan in the coming decades or something, this kind of exercise is not practical. Today we fight largely asymmetrical wars that involve urban combat and anti-insurgency tactics. Another problem with our training, in my opinion, is that we spent most of the time working on hardcopy maps and only a few weeks on computers. We’re a technological military force in today’s world, and we should be emphasizing state-of-the-art methods. Clearly the Defense Department puts less money and resources into the Reserves.

I was at the top of my game when it came to physical fitness. They divide running groups into Alpha, Bravo and Charlie. I had been running with the best runners in Alpha, even if I was always one of the slower; but the fact that I was 40 years old made me look good. So I continued to run in the Alpha group. It was hard work, as I’m not a natural-born runner, but it was rewarding. One of the advantages of taking an APFT (Army Physical Fitness Test) at Huachuca was that they had us run slightly downhill on Apache Flats. This was a concession, so the drill instructor said, for running at a higher elevation. Honestly, I never experienced any breathing issues because of elevation. One time my two-mile run clocked in at 12 minutes! In my best days I usually run it in 14 minutes. Whatever. I think they just wanted to make sure their soldiers got good PT scores, as the Army emphasizes good scores and it makes the drill sergeants look good.
We would get weekends off, which was a nice treat when you came directly from basic training. Ever the lone wolf, I would check into a hotel for a Friday or Saturday night, or sometimes both if we had the full weekend, and just chill by myself—writing, watching TV, and resting. I have a vivid memory of walking the main avenues of Sierra Vista, the small city adjacent to Fort Huachuca, blasting the latest CDs from Disturbed, A Perfect Circle and Lamb of God in my headphones and wearing dark glasses in the nice dry heat of Arizona.  I'd hang out at Taco Hell or a local pizza joint.  The city didn't have a bone fide Starbucks, and I'm sure that will change if it hasn't already.  I resorted to the Starbucks booth in a Safeway grocery store.  I killed plenty of off hours at Hastings bookstore too.

One of the highlights for me was attaining the German Armed Forces Proficiency Badge with a select group of soldiers.  The badge involved track and field, swimming, marksmanship, and a 12-mile march.  Since I'm a crappy shooter, I received the bronze version of the badge; otherwise, I was gold all the way!  By the way, we also got a fair dose of combatives training, because our drill sergeant happened to be an expert in ultimate fighting.

Just about any prolonged military training in the Army includes an FTX, or field training exercise, at the end. I mentioned in Part 2 of this series that basic training had three of them. For the most part I didn’t enjoy the FTX at Fort Huachuca. Why? First, we spent nearly a week outdoors without any showers. I was in a tent with four or five guys and boy did it start to stink in there! Secondly, the high desert in early December was cold as hell. On a positive note, the drill sergeants suspended my duties as platoon leader during the FTX so that I could focus on my own issues and not worry about other soldiers. So that was nice. We trained in military tactics; gathered and analyzed intel in a fictional scenario involving terrorist organizations in the Caucasus; received instructions on dealing with and calling in IEDs, unexploded ordnance, and medivac; and posted guard at night. Regarding the last of these tacks, we were told not to engage illegal aliens who might be walking through from the border. Some of these people actually took food we had laid out. Can we wonder that we have such a border problem? Even the U.S. Army must turn a blind eye!

My family visited me in late August on their drive back from California. (After coming to my graduation in Missouri, they drove on to Los Angeles to spend time with family). We spent a night at Tombstone and visited the historic town.  In mid October I met my wife in Tucson.  It was a wonderful time and I fell in love with the city.  I had been there visiting a friend in February of 2002.  My wife and I returned in 2006.  We also visited Tombstone at this time and by happenstance it was the 125th anniversary of the O.K. Corral gunfight!
Posted by Der Viator at 1:50 PM