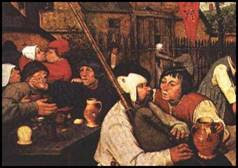 Just look at those people in the picture. They seem like they’re having fun, don’t they? Granted, they didn’t have DVDs, IPODs, CDs, MP3, or KFC; but, FYI, they also didn’t have IEDs, AIDS, the IRS, and ADD. (Yet I have a suspicion that early moderns, like moderns, had their fair share of BS and SOBs.) There was nothing like sitting around the hearth and whittling a gnarled piece of wood, whilst ma churned the butter and the half-wit servant boy applied leeches on ailing pa. Imagine if 300 years from now 24th-century Americans, or Chinericans rather, looked back at our times and thought, “What a sad lot! It must have been miserable to live back then: no anti-gravitational beamers, no cranial-rectal reverse modulators, no portable nostrilators. Frankly, I’d go nuts!” (Evidently our descendants will no longer have use for acronyms.) Fortunately we don’t have to worry that future generations will think ill of us because according to the Mayans the world will end in 2012.

The people of early modern Europe enjoyed life. They woke to a sunny morning with goals to achieve, and reflected on their missed opportunities or new relationships at sundown. They drank, and drank well; loved their God; fed their families; wrote their treatises; tilled the soil; and mourned the loss of loved ones. Some can inspire us with their commitment and courage, while others remind us of the dark paths human beings can so easily take. As one of these articulate early moderns once wrote, “all our yesterdays have lighted fools the way to dusty death.” And so it is. But let us review the deeds of our forbears, the vainglorious and the humble, the worldly and the contemplative, so that we, empowered with this knowledge, live a life of self-cognizance and perspective, not like the beasts of the fields who know not whence they came and whither they’re going.

Between the Reformation and the rise of Napoleon (1500-1800) Europe laid the groundwork for the global hegemony that countries like France, Britain and the United States have enjoyed in the last two. The political and technological developments of the early modern European states created an enduring legacy of power and influence. To be sure, the West has been both a force for good in the world and a source of oppression for peoples abroad. The collision of world cultures has been a mixed blessing for many of the nations, colonial powers, and developing countries involved. Those who dwell only on the brighter moments and those who emphasize the dark chapters, I submit, reveal their jingoistic and self-righteous viewpoints respectively. Steer your course away from both rocky shorelines with a self-critical spirit as your rudder. History requires a more layered metaphor for me; it is like the perversely enigmatic minor major seventh chord, dissonant and shrill. You think that something’s wrong, you’re intrigued, and you await a resolution. But the cacophony of life doesn’t always resolve itself in the way we would expect.

There’s no guarantee that a study of the past will ensure a brighter tomorrow, for such a hope presupposes that everyone is on the same page, has equal access to the world’s resources, and is beholden to a similar vision for the future. Without such knowledge, however, we will most certainly step into the abyss. Hopefully we will not see World War III; our grandchildren and great-grandchildren can deal with it decades after our demise. We should strive to change the world for the better, but, not expecting miracles, realize deep down that certain undesirable activities are endemic to humankind. Like my mother-in-law who mistakenly thought eating Jenny Craig meals and her normal fare would help her shed some pounds, you come to realize that, sometimes, you can’t have it both ways. We can’t expect a sanguine future and at the same time ignore reality on the ground. Besides, you just might have your money refunded and find yourself banned from the program.