Puerto Rico and the Legacy of Las Casas 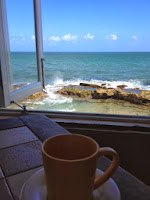 I’ve been in San Juan, Puerto Rico since Thursday afternoon, soaking up the sun and returning to my academic roots after a long hiatus.  A highlight today was ensconcing myself this morning at a restaurant table with a seaside view to enjoy breakfast.  Why am I in Puerto Rico?  I organized two conference panels on the Dominican friar Bartolomé de Las Casas, a “Protector of the Indians,” for the annual Sixteenth Century Studies Conference, and contributed a paper on my use of Las Casas’s writings in a comparative genocide course I teach at the University of Minnesota.  Fittingly, Puerto Rico is the location of this year’s conference.  Las Casas spent over a decade in the Caribbean, including a brief stay in San Juan in 1521.  Years later when he penned his Brevísima Relación de la Destrución de las Indias he would not mince words about what happened on this island paradise.  The Spaniards committed atrocities against the hapless natives, laying them on “gridirons made of twigs and tree branches to roast them and setting loose savage dogs, and afterward oppressing and torturing and ill-treating them in the mines and other labors, until they had consumed and worn away all those poor innocents and slain them.”  The Dominican’s moral courage and dogged determination to protect the Amerindian population from the ravages of his fellow Spaniards have preoccupied me these past couple of days, as scholars have gathered here from different disciplines to discuss his legacy.

Above all, though Las Casas was a flawed human being, rather cantankerous and combative, and though for a time he supported the African slave trade only to repent from this hypocritical stance years later with a contrite heart, what amazes me was the ability of this individual to stand up against the imperial system, indeed the zeitgeist, and, like an Old Testament prophet, condemn crimes against humanity committed by his own people, even as he appeals to the conscience of his contemporaries, including no less than Charles V, the Holy Roman Emperor and King of Spain, who eventually supported new laws to curb abuses in the New World.  Las Casas was a voice crying in the wilderness, but he was not alone.  Little did parishioners realize when Dominican preacher Antonio Montesinos entered the pulpit one Sunday morning in Santo Domingo what was in store for them. “There is a sterility of conscience among you on this island [Hispaniola],” he boldly declared, “and a blindness in which you live.”  He went on with a series of questions that seems to echo in eternity, or at least into our present day: “Are these not men?  Do they not have rational souls?  Are you not obligated to love them as yourselves!  Don’t you understand this?  Don’t you see this?  How can you be in such a profound and lethargic sleep?”  Such sermons made an impression on Las Casas, who had a profound conversion experience, giving up his life as a slaveholder and entering the Dominican order, much as an English sailor named John Newton, two centuries later, would condemn the “evil institution” that he had benefited from and go on to become an ardent abolitionist and pen “Amazing Grace.”

I didn’t come here just to talk about Las Casas, however.  I’ve enjoyed this brief time in Puerto Rico, and, honestly, I’ve attended only the conference panels I organized so as to have plenty of time to roam the shoreline, walk the streets of downtown San Juan, and take photos of some historic sites.  I did show up at a reception in the lobby last night, however, so I could get three or four free glasses of wine.  (Not long thereafter I met some people from the conference when I sat down to play an abandoned grand piano, mildly tipsy, though I had no interest in networking with scholars this weekend.)  It’s a bit humid for my tastes here, but it’s spectacularly beautiful.  My participation in this conference isn’t merely an excuse to visit Puerto Rico; after all, it comes at a busy time of the year and it's difficult to set aside the weight of the world while I'm here.  I haven’t attended one of these conferences since 2004.  Many things have happened since then, including military service and overseas deployment.

This conference is an effort to reconnect with my 16th century roots, so to speak, after years and years of teaching other topics and abandoning research.  In a way, I’m an academic in my heart of heart; I can walk the walk and talk the talk, and for the most part I enjoy this life.  Yet I realize that I'll never be a normal academic, given other life experiences and, well, some self-confessed oddities.  Nonetheless, I’m somewhat in the game now, as scholars want to put something together next year and asked if I’d be interested in publishing papers in these panels and help make the Dominican’s life work more accessible to the public.  2014 marks the quincentenary of Las Casas's conversion, when he relinquished his land grant of slaves—no better sign of an internal change of heart.  I’m not sure if I’ll be a part of this project, as I’m no Lascasista.  In fact, I’m quite outside my linguistic ken in taking on a subject such as this.  Two things I can affirm, though:  (1) Las Casas is a Mensch, even a hero of mine, well worth consideration and (2) this trip to San Jose, however short, has been a welcome respite from the rigors of this semester.
Posted by Der Viator at 8:43 PM