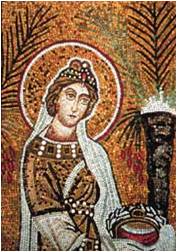 Buried deep in the annals of early church history is the story of Recta and Anus, Christian martyrs who refused to bend the knee to Rome and suffered excruciating deaths as a result.  In 250 CE, the vainglorious Roman emperor Decius required all Jews and Christians to worship pagan deities and offer a burnt sacrifice to the imperial family.  If this weren’t enough, Recta’s father, a prominent member of the plebian tribune and stern paterfamilias always looking for ways to advance himself and his family, forced his daughter to marry Tiberius Defaecius, a proud captain of the Praetorian Guard.  Recta, who had taken a vow of chastity to serve her Lord, found herself in a dilemma.  Should she obey her family or serve God?  She finally went to her father with her decision after consulting bishops who had secretly remained in Rome.  “I cannot marry Tiberius, father.  Please don’t make me!  I’m committed to the one true God and have dedicated my virgin body to the Christ.”  “Nonsense!” her father fired back. “You will not shame this family, but do as you’re told!”

Meanwhile, Anus, Tiberius’s slave boy, a neophyte who according to a 6th-century martyrology had heard about Recta’s compulsory betrothal from an angelic messenger while tending his master's horses, sought to help the Christian maiden through hours of prayer at the Sacra Ecclesia Haemorrhodiae of Fiumicino.  The Lord answered his petitions, for Tiberius had died while en route home from a campaign against the Sassanid Empire.  But the miracle came at a price, for both Anus and Recta were rounded up and executed, the former through burning at the stake and the latter through the application of poison ivy and other harmful herbs over her naked body.  Pious adherents to the cult of St. Recta preserved the two saints' remains in the Church of St. Flatula just outside of Monterotondo, where they remain to this day.  Catholics still commemorate the Christian martyrs on their joint feast day, April 13, a time of the year when tourists can witness the processions and festivities and gaze in amusement at the banners and placards depicting an inflamed Anus and itching Recta.
Posted by Der Viator at 8:47 AM