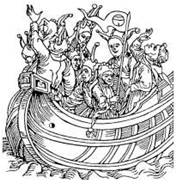 I’m not much of a sailor.  I once took a small sailboat out into the vast blue Caribbean off the coast of Cozumel, and with disastrous results. I no longer swim in a natural body of water unless it’s in a remote wilderness area and the water is more or less pristine.  I’ve canoed a few times, but I don’t know how to steer a larger vessel.  Sharks freak me out. I don’t like sand in my crotch.  I’ll never go on a pleasure cruise, what with the abductions, poor service, unhygienic conditions, and ridiculous prices I’ve heard so much about.  It’s not a mystery that I didn’t consider the Navy when shopping around for a military branch to join.
Putting all these unflattering facts together, I find it ironic that I’m on a Ship of Fools.  Who knew?  I’d rather have a front row seat in the Theater of the Absurd, because I’d at least get to watch movies.  I wouldn’t even mind Hell on Earth, for presumably I’d get the best of both worlds.  Instead, I’m walking the decks of the Ship of Fools observing rich and poor, young and old, foolish and less than foolish, men and women, monsters and freaks, posers and pontificators, dogmatists and skeptics, theists and atheists, sheep and goats, baristas and bartenders, shysters and propagandists, saints and sinners, friends and foes, smartasses and dumbasses, ascetics and hedonists, and the like.  Would that I could just take a leap of faith and get the hell out of here, but, again, sharks freak me out.  Oh well.  I suppose this ship will come into the harbor soon enough. Sebastian Brant in his Das Narrenschiff (Ship of Fools) of 1494 writes:

A fool that person is from birth
Who’d live long years upon this earth:
It’s nothing but a vale of tears,
In joys brief, long in grief and fears;
This stay for mortals ne’er is meant
To be quite long or permanent,
Since all will make a journey grand
Into a strange and unknown land.