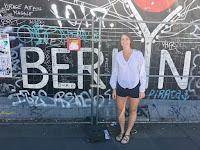 We spent a good chunk of the day in Kreuzberg, a borough just south of city center Berlin known for both its counterculture tradition and large population of immigrants. Of particular interest to me is the Turkish community and more recent influx of Syrian asylum seekers. We took the U-Bahn to Hallesches Tor and proceeded thence on foot to the Turkish Market along the canal on Maybachufer street. Jessi enjoyed Turkish coffee and we took in the sights and scents of fruit and spices. Half past noon we met with Céline for a spot of tea in at a Kreuzberg garden café. She serves as program director for a non-governmental counseling center for immigrants. It seemed more of a social visit than anything else, but I wanted to strategize a bit for next year’s global seminar. 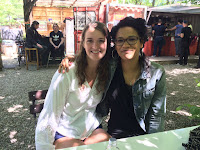 After checking out the site for the “Carnival of Cultures,” a multicultural festival in Kreuzberg planned for the weekend, we headed to the East Side Gallery, a section of the Berlin Wall along the River Spree containing paintings from artists throughout the world. We gazed upon a sunny skyline from the double-deck Oberbaum Bridge that once straddled East and West Berlin. The gleaming cross of the radio tower provided an opportunity to talk about the “Pope’s Revenge” and differences between the East and the West during the Cold War. Wanting to explore more of the Wall’s history with Jessi, we went from the East Gallery to the Berlin Wall Park on the other side of town. Located along Bernauer Straße, the park features stories and sites of successful and unsuccessful attempts to flee to the West. Once can appreciate the perverse and painstaking efforts on the part of the East German government to keep its hapless people from leaving “paradise.” The searchlights, barbed wire, sensor fences, guard towers, barricades give silent testimony to an oppressive police state. The Great Wall of China, Hadrian’s Wall, and even Trump’s wall are intended to keep out the barbarians, real or perceived. The Berlin Wall, however, was a large jail cell keeping people confined to their life of Trabants and IMs for nearly 30 decades. Fun. 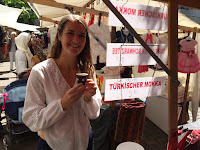 We took the U-bahn to Potsdamer Platz and walked through the Mall of Berlin before arriving at the site of Hitler’s bunker. Jessi marveled at the unassuming location. One finds neither a museum nor commemorative stone. In fact, the bunker lies under parking lot and apartment complex. Today you can find an informational billboard with detailed description of the bunker’s layout, but it’s my understanding that the site had no indication whatsoever that the Nazis’ last stand occurred below the surface. Walking further up the road we come across the outdoor Holocaust memorial which is aptly and penitently called the Memorial to the Murdered Jews of Europe. The site consists of hundred of concrete slabs in various sizes and heights. While the imagery is open to interpretation perhaps, one gets a sense of dislocation, confusion and loneliness while walking through the grid formation of slabs. Moreover, the slabs look like gravestones. 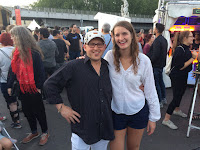 In the evening Jessi and I met up with my friend Joseph and made our way to the Carnival of Cultures in Kreuzberg. Held every year, the event celebrates cultural diversity with costumes, food, music, and plenty of beer. We watched a few musical performances, drank some of that strange brew, and called it a night. Germans know how to party.
Posted by Der Viator at 1:20 PM