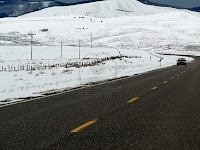 The drive along Highway 29 was relatively tranquil and serene.  For a long stretch of the road one sees nothing but crimson barns and silver silos against a vast backdrop of snow-covered farm fields.  Honestly, I find the drive extremely boring and, industrious to a fault, try to get work done along the way.  I know it's not safe, but I had a stack of papers on the passenger seat and with pen in hand and one eye on the road I started to grade, or tried to grade, a paper or two.

When I unwittingly crossed into the fast lane and almost hit the center divider, I knew it was time to stop.  I wasn’t making much progress on the grades anyway.  So I let my mind wander, as is my wont, whenever I drive a bleak stretch of highway.

I kept thinking about a student’s comment in class this morning.  We had been discussing the themes of sin and guilt in Nathaniel Hawthorne’s writing.  To the student’s chagrin, I argued that guilt is a social construct, neither intrinsic to human nature nor rooted in a theological system.  I think the argument I was making was a bit too iconoclastic or defiant for her—my words, not hers.  I admit that I probably argued my position more forcefully than I should have as an educator, but on occasion I find it difficult to remain the dispassionate instructor trying to entertain everyone's viewpoint, particularly when students make such simplistic claims.

About an hour into the drive I saw three Mennonite women on bicycles sporting overcoats and multicolored petticoats.  This was quite a sight for January 19, and I naturally did a double-take.  If you're wondering, I didn't have a drop of alcohol until I got to the hotel

They had a look of determination on their homely faces, no doubt a determination to get back to the hearth.  What the hell were they doing out there?  This spectacle at least broke up the monotony of the drab, white scenery, and I killed a good ten minutes of the drive imagining what their names could be, finally settling on Rebecca, Sarah, and Grace.

It was approaching twilight when the sound of the gas light coming on shook me from my reverie.  I had been watching migratory birds silhouetted bible black against a pinkish-orange sky.  The sign ahead read: Dark Falls 51 miles, Edgar 7 miles.  I wasn’t going to make it to Dark Falls, my destination, so I got off on exit 150 and pulled into a travel station to fuel up.

Everything seemed fine.  Though we are well into January in the Upper Midwest, the sun was shining and the sky was clear.  After gassing up, I entered the minimarket to use the restroom and grab a bag of chips.

As I stood before the snack shelf trying to make a decision, a tall  unshaven guy in a blue flannel shirt and a John Deere baseball cap sitting in the adjacent diner looked in my direction and got up from his seat.  Straight from central casting, this local yokel had a stupid grin on his face.  Something told me, however, that he was not just a simpleton.  He appeared evil and menacing.

I noticed him with my peripheral vision, but I presumed, or hoped, that this guy was going to the restroom that was in my direction.  Suddenly, he turned toward me with a monstrous scowl.

“Oh yeah, get some chips, huh?”  He uttered these mocking words so hatefully that I froze like a stunned prey in the lair of a predator.

“Excuse me?  Pardon me.”  He repeated my words in a tone of mockery, his effort at an English accent.

“You fuckin’ faggot!  You’re a piece of shit!  What do you think of that?”

To be honest, I was scared.  Who is this guy?  Why is he accosting me like this?  I didn’t want to look at him, fearing further eye contact would set him off even more.

“Are you a faggot, riding around in your Camry?”

I just looked at this unkempt bumpkin in astonishment, not knowing what to say or do.

“You’re really going to pretend nothing happened.”  That was more a statement than a question.

As he said those words, I instantly remembered him, or his pickup truck rather.  When I was gazing at those damn birds, I momentarily didn’t pay attention to the road and almost ran into a pickup truck in the slow lane. I didn’t see him but I do remember a guy in a baseball cap.  Evidently I had the misfortune of almost running the town bully off the road.

“So this guy almost runs me off the fuckin' road and now he wants to piss in my town.  Well ain't you a class act!”

“Leave him alone, Dougie,” said a large woman in her fifties at the cash register.  “He’s just an asshole from the city.  Never mind it.”

I’ll admit that I was afraid.  Was this ruffian going to drag me outside and beat me to a pulp?  Fear alone, though, would not adequately characterize my emotional state.  I felt humiliated.  I felt anger.  Also, the experience is surreal.  I mean, have you ever been in a situation when you feel like everyone’s looking at you, mocking you.  When I was a college student, I once entered the wrong bus, a chartered bus.  Everyone was looking at me.  Finally, the bus driver came up to me and said he'd throw me off if I didn't leave.  I didn't even realize I was on the wrong bus!  That’s how I felt at the minimarket in the gas station of this whole-in-the-wall town of Edgar.

It’s as if I had entered a strange world of zombies.  The other people in the store seemed bemused, almost complicit.  What kind of town was this, I wondered?

“I ought to beat your fuckin’ face.  Hey Carl!”  He motioned with his head toward the heavy-set man in the diner with whom he had been talking.  “You think this guy needs a lesson or what?  Something to remember his poor driving skills?”  He laughed.

“Ah, let it go, Dougie,” the man replied, less out of compassion for me than not wanting to deal with a situation.  “He ain’t worth the effort.”

“You don't want the sheriff in your face again, Dougie”

“I suppose you're right, Carl.”

The woman at the register weighed in again: “Or at least handle your business outside, off the premises.  You know?”

“Okay, then.  Get the fuck out of here before I change my mind.”

I left the minimarket in haste and got in my car.  Still stunned, and afraid, I just sat there in my car next to the pump.  For some reason I didn’t pull away.  Why?  Curiosity.  I saw the guy come out of the store with a six pack in hand.  He looked over at me, and menacingly pointed at me, his hand shaped like a pistol and the thumb mimicking a shot having been fired.  He drove off and this whole ordeal was over…or could have been over.
Posted by Der Viator at 2:17 PM