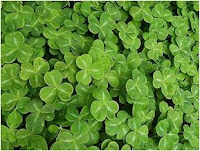 I’m still waiting for a pot of gold at end of the rainbow.  Why not?  I deserve it.  Do the math.  I’m partially Irish.  Really, I’m just an American mutt, but given my fair skin and hotheaded nature, my genes probably lean in an Irish direction.  Santa Claus is complete bullshit, the Easter bunny is a sham, and the Tooth Fairy—let's face it—is a bona fide disgrace; but I do believe in Leprechauns.  I like those little red-haired guys a lot, even if, truth be told, I like Leprechauns in the way you’re not supposed to like them.  Liam Neeson is one of my favorite actors.  Heck, I've been  eating Lucky Charms every day as preparation for an upcoming half-marathon in Rapid City, South Dakota.  I think I’ve made my case.

But here’s the thing.  Despite my Irish credentials, I think St. Patrick’s Day is overrated.  Am I wrong?  I mean, corned beef, cabbage and a pint of Guinness?  Really?  I’d rather drink piss and eat shit and leaves.  Besides, in all due respect, what did the Irish ever do for us?  At least the Frenchies helped us in the American Revolution, you know?  The Poles gave us those wonderful sausages.  And the Germans?  Well, I guess they gave us sausages too.  And what’s this whole "kissing the Blarney stone" thing, huh?  It’s merely an excuse for wisecracks at the office to make phallic references.  If I had a nickel for every dumbass who placed the possessive adjective into the phrase: “Hey everyone, who wants to kiss my Blarney stone?”  My, my, aren't we hilarious!


Here’s a popular misconception: Most people think that the color of St. Patrick’s Day is green because of Ireland’s lush viridescent landscapes.  Wrong!  When in 1810 an Irish noble by the name of William O’Callahan presented the English Queen Charlotte with a silver-plated crest from the Belfast Order of St. Patrick, the days-old pistachio pudding that he had consumed hours earlier during the banquet worked its magic on his bowels.  Had it not been for the crest, O’Callahan’s verdant vomit would have ruined Her Highness' imperial white muslin dress.  To this day we wear green on St. Patrick’s Day to commemorate this dude's puke, whether we realize it or not!  You just can't make this stuff up!  I know what I’m talking about, okay?  First off, I’m more or less Irish.  And secondly, I’ve been to Dublin, albeit I was on a one-day layover from Istanbul and never ventured outside the Starbucks in the airport.
Don’t get me wrong.  I know the Irish have had a rough go of it in their checkered history.  I for one have never forgiven Cromwell for Drogheda and Wexford.  And the Potato Famine two hundred years later was one of the worst tragedies of the nineteenth century, an era known for tragedies (and only to be outdone in the tragedy-department by the subsequent century).  My sympathy only goes so far, though, because I did a little research.  It turns out that those adorable little Leprechauns, the ones I lauded at the beginning of this piece and whom I had once fantasized about during lonely nights in hotel rooms, are nothing more than money-grubbing gold-mongers.  Those buggers spend all day counting their gold coins and selfishly hiding their loot at the end of the rainbow.  So much for finding a pot of gold for me after all these years of waiting!  I’ll never look at rainbows in the same way.  Thanks, Irish!  Seriously.  You can kiss me frickin' Blarney stone!
Posted by Der Viator at 6:04 PM