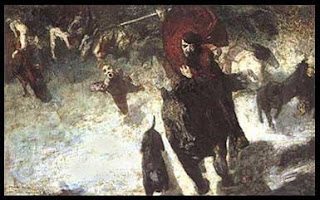 Today, April 20, is Hitler’s birthday. No, I’m not celebrating it. It’s one of those freaky dates permanently lodged in my primate brain, like those other April days in history I mentioned in an earlier blog. If he were alive today, he’d be 121 years old. Unfortunately, Hitler indeed lives on in the hearts and minds of certain people. Aryan gangbangers, for instance, tattoo their knuckles with 4-20-89, Hitler’s birth date. More generally, the evil dictator still casts his dark shadow over Western civilization. Historians have often pointed to Churchill, FDR, or Hitler as the “Man of the Century.” For my two cents, Hitler was the most significant. I'm not alone in saying this.  After all, why do so many prophecies supposedly predict Hitler as the coming Son of Perdition, from St. John to Nostradamus to the Mayans?  They're not predicting the arrival of FDR, are they?  Hitler reminds us all that we can’t equate technological or societal progress with our much longer moral development as a species. The former is in no way a gauge for the latter.  I’ve already written about Hitler in this blog, and I’ve explained my interest in him. Allow me one more musing.
Look closely at the image above, "The Wild Hunt." One of Hitler’s favorite artists, Franz von Stuck, painted it the year of his birth.  The Teutonic god on horseback looks uncannily similar to Hitler, as Robert Waite argues in his book The Psychopathic God, a study that is not without dubious and unsubstantiated views on Hitler. Perhaps the image made such an impression on Hitler that he resolved to alter his appearance later in life so as to look like a Wagnerian deity. That he had such a grandiose self-image despite his humble beginnings is clear to most students of history. Similarly, Hermann Göring boasted at Nuremberg after the war that they’d be making statues of him decades later. Despite conventional wisdom, most serial killers and genocidal rulers do not lack in self-esteem. Roy Baumeister, in his book Evil: Inside Human Cruelty and Violence, disabuses us of this notion.  Fortunately, the only ones hateful enough to try and build such monuments to the Nazi past sit in prisons with tattooed knuckles or are otherwise despised by mainstream society.
Posted by Der Viator at 6:05 PM