As an old Olivia Newton-John song has it, “I’ve got good Kentucky whiskey on the counter.” I don’t doubt the goodness of bourbon, but when it comes to spirits I’m a Tennessee man all the way. My family and I took a tour of the Jack Daniel's distillery in Lynchburg, Tennessee this morning. But I’m getting ahead of the story.
We’re on a family vacation to Alabama. Yes, you heard me correctly—Alabama, not Florida or California.  My wife and second daughter Jessi wanted to go to the beach—a real beach, as in one on the ocean—so we embarked on the twenty-hour drive to Gulf Shores. As I’m writing, I’ve been up for over thirty hours, and we’ve been on the road for about 15 hours, apart from our three-hour visit to Lynchburg and environs this morning and a shorter stop last night for dinner. Our trip didn’t exactly go according to plan, my original itinerary anyway. Yesterday afternoon the three of us took a detour to the southwestern part of our state to watch Monika’s soccer game and pick her up. (My eldest daughter, Erika, now 19, stayed at home.)  So I drove the 12 hours to Lynchburg, with just one 45-minute stop in Peoria for food.  Wired on a Venti Americano, and with my wife and girls dozing off, I cranked up Lamb of God and Disturbed, but to little avail. Illinois has got to be the largest, most boring state to drive through!

Lack of sleep and unfamiliarity with my wife’s Nissan led to a predicament. I almost ran out of gas. It was about 2:30 in the morning, and we were driving through some ungodly place in the last stretch of the Interstate before the Kentucky border. So I got off on an exit that didn’t look promising, but the gauge was reading low so I took a gamble. Sure enough, I made it to the gas station, but it was closed and the pumps were shut off! So I got back on the Interstate and took the next exit with gas service, which drew me in two miles down a lone highway(!). Then, all of a sudden, we entered a surreal, bizarro world. The town was totally empty of cars and people; all the gas stations were closed for service. It felt like that Twilight Zone episode where the guy’s walking around a vacated town and no-one’s in sight. Only by happenstance, and with probably only a ¼ gallon left, did we come across a BP station on our way back to I-24. (It's not on MapQuest.)  Thank God for the Brits!

By the time we entered Kentucky it was raining in biblical proportions and I had to maneuver around an armadillo carcass every other mile.  As tired as I was, I had to keep my wits about me, especially if we made any stops. I figured we were close enough to the Ozarks. I’ll be damned if I’m going to be some hillbilly’s Ned Beaty; fancying myself more the Burt Reynolds character, I’d grab the combat knife and steel baton tucked under my seat and take those f-sticks out—the whole lot of them.  The only good sign after having entered Kentucky?  Well, it's literally a sign: speed limit is 70, not 65.  Daddy like.  It's time to put pedal to the medal, make some good time, and run roughshod over those ugly creatures, be they armadillos or toothless banjo-playing hillbillies.

The tour at Jack Daniel's distillery was fun, despite my fatigue. The original plan was to check into a hotel nearby, sleep for the night, and visit the distillery the next day. I didn't realize my wife wanted to get a move-on and race to our destination in one fell swoop.  But I see she's wearing her game face.  Listen, I've driven straight from Los Angeles to Wisconsin non-stop three times, but I wasn't prepared to spend my vacation driving the whole 2o-hour trip in a straight shot.

Speaking of shots, I suppose the highlight at Lynchburg was getting a good whiff when the tour guide with a heavy Tennessee accent lifted up the charcoal mellowing vat. I concluded right then and there that Jack Daniel is one of Tennessee’s two greatest exports, the other being that depraved reprobate with a golden voice, Elvis. (Sadly, the state's two worst exports include the KKK and country music.)  Having seen the process, and the great care that the Jack Daniel's people take in making their product, I must say, I'll drink the amber elixir with greater appreciation than ever before.  It certainly made my drive through Kentucky more enjoyable and interesting.  (Kidding!)

So here I am in the passenger seat writing in my notebook, totally exhausted but unable to sleep. A Toyota Landcruiser just passed us in the fast lane. All I could see was a brown lab with his head stuck out the passenger window enjoying the wind in his face. For a brief moment our eyes met. Something in his piercing gaze told me he knew he was having his day (as all dogs do) but I wasn’t. Did he pity me or just commiserate with me? 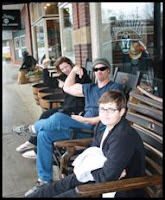 I shouldn't complain too much.  I see my role as more of a security escort than the engaged father I once was during road trips.  The kids are older now.  And, honestly, my thoughts too often appear to be elsewhere than the here and now.  We've now entered Alabama. I look longingly at hotels we're passing, as I try in vain to get some shut-eye in the passenger seat.  My lovely wife's got her 32-ounce diet Dr. Pepper and has subjected me to John Mayer's live CD.  You probably have the same rule: whoever drives selects the music.  Need a bed.  Need sleep.  The trip thus far has been vexing and tiring.  Will Alabama be a better experience?  After all, it's our destination.  That’s a story for another day…
Posted by Der Viator at 2:43 PM