I just watched The Dark Knight Rises!  I’m still processing how great it was, and why, going over in my mind the large ensemble cast, the brilliant screenplay, and the spectacular mise-en-scène.  I’m not an action movie kind of guy nowadays, less so when it comes to the well-trod superhero genre, but it was the best flick I’ve seen in ages.  I’m not here to talk about Batman, though.  As my wife and I were sitting in the theater, enjoying our caffeinated beverages and dark chocolate cookie, I couldn’t help but think about the victims of the now-infamous shooting at a premiere showing of the movie nearly two weeks ago in Aurora, Colorado.  I could easily picture the scene then as I looked around the theater tonight: boyfriends putting their arm around their gals; girlfriends resting their hand lovingly on their guys' thigh; teens munching on their popcorn and candy, lost in the magic of the silver screen.  Then evil enters the theater.  I say evil, an evil man, not a crazy or even deranged person: wickedness in the shape of a masked twenty-four-year-old loner wielding a lot of weaponry and a need for power and recognition.  As I was getting dressed for work yesterday with the news on, CNN was previewing a segment entitled “Where was God in Aurora?” that would show after the commercial break.  I didn’t stick around, but I know the topic well.  Ah yes, the ole “Problem of Evil,” a moral conundrum that has a venerable tradition and has left behind an equally long history of unsatisfactory answers: How does one reconcile belief in a benevolent, providential God with the existence of such evil in the world?

The eighteenth-century philosopher Voltaire, no stranger to “the oppressor’s wrong,” had much to say on this somber topic.  After a major earthquake in Lisbon killed thousands of people and destroyed the city on a church holiday, he wrote: “If the question concerning physical evil ever deserves the attention of men, it is in those melancholy events which put us in mind of the weakness of our nature.”  Philosophers and theologians distinguished physical evil, such as an earthquake or plague, and moral evil, such as the Holocaust or the “Aurora Massacre.”  I suppose atheists have less of a difficulty with the Problem of Evil; after all, if you don’t believe in a benevolent God watching over humanity, evil in the world is not quite so embarrassing or contradictory.  Still, even the atheist must confront an uncomfortable and puzzling fact about existence.  Keep in mind that I don’t use this word strictly in a theological or spiritual sense but simply to mean “worse than bad.”  That’s not a very sophisticated definition, I readily concede, but like porn or injustice we know it when we see it, even if we can’t articulate a satisfactory description of it.

I suppose I’m guilty of often thinking and writing about evil.  When questioned about such a morbid fascination, I usually retreat behind the claim that it’s a matter of academic interest.  That’s only partly true; my fascination is the chicken and my focus as a university instructor is the egg.  Why such an interest in pain and suffering?  I don’t know.  I lost a beloved sister when I was young.  Who knows exactly?  I don’t know what it is, but while I’m perhaps a bit obsessive on this topic, I’m certainly not alone in my fascination. To wit, I was sitting in a theater packed with people wanting to watch the dark knight fight his inner demons while a psychotic killer threatens to nuke the city of Gotham.  What kind of sicko would go see something like that?  Answer: sensate Homo sapiens between the ages of 7 and 72.  (I’m sure there’s an even older audience, but I’m tipping my hat to Senator Pat Leahy, 72, a Batman aficionado who has a cameo appearance in the movie.)

I’m currently teaching a summer course on “trouble spots” in the world today.  I have students reading the memoir of a Tutsi woman, Immaculée, who survived the Rwanda genocide in 1994 by hiding in a small bathroom with six other women for three months while Hutu killers massacred members of her family.  A devout Catholic, Immaculée forgives her tormenters.  On the one hand, I admire her faith and devotion to God in such dark times, though I think her statement that, and I paraphrase, there are no bad people, just good people who do very bad things, is at best a misguided platitude.  Her gratitude toward God for survival is inspirational.  She's also thankful for those rare good things that happened during the genocide.  I don't know what I'd do in her situation, but chances are I wouldn't have carried myself with the grace and magnanimity that she possesses.  On the other hand, I must pose my question, however impious it might be: For whatever small acts of kindness Immaculée experienced during this terrible ordeal, didn’t God allow this horrific orgy of sadistic mass murder in the first place, just as God sat at the helm in 1755 when an earthquake shook the bejesus out of  a devoutly Catholic city during All Saints’ Day?  I like Voltaire’s understatement of this absurd situation: “All things are doubtless arranged and not in order by Providence, but it has long been too evident, that its superintending power has not disposed them in such a manner as to promote our temporal happiness.” 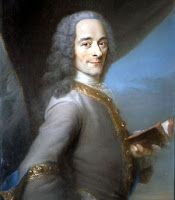 Anyway, in the course of the classroom discussion I made the statement that genocide is a product of rational calculation and not the result of an irrational, spontaneous fit of passion.  A student asked: Well, that’s not normal though, right?  I qualified my statement slightly, explaining that the architects of mass murder, if not the rank and file killers on the ground, are usually making a decision behind closed doors in an office replete with maps, documents, and news reports.  Still, I think my statement holds true for most mass murderers across the board.  Without a doubt, perpetrators like the Hutu death squads and James Holmes are morally non compos mentis, but they certainly demonstrated an intellectual prowess and sharp attention to detail that would put most of us un-crazy people to shame by comparison.  As this guy sits in the courtroom with florescent orange hair and a dazed look on his face, there’s already talk of an insanity defense.  That’s to be expected.  Nonetheless, the reader will duly note that Der is rolling his eyes big time at the thought that this guy could be deemed insane after what looks like months of methodical planning, a careful selection of weaponry, and internet research for booby-trapping his apartment.

In his book Candide Voltaire developed a character named Dr. Pangloss to mock Leibniz’s view of the “best of all possible worlds.”  This know-it-all provided cold comfort to the victims of tragedy by telling them all things will work out for the best.  There’s an ultimate purpose for evil in the grand scheme of things.  God knows how it all works for the good, but we mere mortals don’t.  (Heck, with this logic, Southerners should have been praising both God and Sherman for bringing the Civil War to a quick conclusion and thus preventing the loss of even more lives and the destruction of yet more railways and homes.  Where’s that gratitude?)  Voltaire isn’t so much condemning the idea per se but the quick answers that we sometimes throw out.  Perhaps those of us who too readily label an evil person as crazy or insane wear the same rose-tinted glasses and inability to face harsh reality as Dr. Pangloss.  I don’t know.  The Dark Knight Rises, though, is a must-see!
Posted by Der Viator at 11:12 PM