The Augustinian Strain of Piety 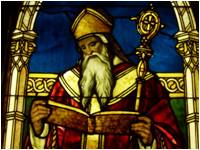 Just as I was starting college, I read a book entitled The New England Mind: The Seventeenth Century (1939), an intellectual history of the New England Puritans by the late Harvard historian Perry Miller. Initially I had intended to study the Puritans in depth, given my "self-inflicted" evangelical background and love of history. Eventually I decided to probe just a bit further back in time, namely to the Protestant Reformation of the sixteenth century. I guess I wanted to get a broader context for the New England Puritans, and this search led me to Luther and Calvin. In the first chapter of his book, Miller describes the “Augustinian strain of piety,” making the point that the Puritans followed Augustine—and by extension, Paul, I would argue—more than John Calvin, whom many have traditionally seen as the father of Puritanism.
My take on his phrase and its meaning, which might not correspond exactly to Miller’s argument, is that this expression of piety manifests itself in gratitude toward God for blessings in life and a humble, contrite acknowledgment of one’s sinfulness. That is, we attribute good things to God and blame ourselves for bad things. On the face of it, especially from an agnostic or atheist viewpoint, this seems absurd. How can God be responsible solely for love and peace in the world and have nothing to do with pain and suffering? Is God not omniscient and omnipotent?  Contrariwise, why should we grovel in our failings and never take credit for our own fortune?  Yes, this strain of piety is not particularly rational, but I would argue that its value for living lies in the perspective or attitude it inculcates. A humble assessment of yourself can help you cope with the evils of the world and hopefully keep you from being an arrogant person. I certainly partook of this strain of piety back in the day; in a way it never leaves you, whatever direction your spiritual odyssey might take.  Granted, I'm an agnostic of a sort nowadays, but in my theistic moments I'm still reticent to ascribe evil to God and more apt to find fault within.
One of my professors at the University of California who had graduated from Harvard told me that Miller was an atheist. I had presented an analysis of Miller’s work in this professor's seminar on intellectual historiography. At the time, I was amazed that Miller wrote with such eloquence and depth about the Puritans without having a stake in their spiritual and theological outlook; he was simply viewing his subject with a historian’s eye and not through the eyes of piety. Evidently, Miller, my professor told me, taught an intellectual history of Christianity that featured Augustine, Pascal and Kierkegaard. That must have been a tour de force course!
At roughly the same time that I was thinking about the humility and absurdity of the “Augustinian strain of piety,” the mid to late Eighties, two songs entitled “Dear God” hit the radio: one by the British group XTC and the other by ex-Ultra Vox singer-songwriter Midge Ure. As the title suggests, these songs come across as a kind of petition or prayer. XTC’s "Dear God" addresses suffering in the world. For theists, and especially Christians perhaps, the song takes no prisoners, providing plenty of fodder to raise the ire of church groups. Did you make mankind after we made you? It has some rather unkind things to say about God, and I certainly looked at the song askance when it came out, even as I admired the songcraft—the melody, lyrics and emotional intensity above all—that went into making it. The singer, or supplicant rather, wonders why God allows starvation, disease, and war—basically, the usual objections to a belief in a providential deity. Ironically, the singer addresses God in order to avow his disbelief in God.
One can take this irony in two different ways. First, the songwriter, Andy Partridge to be specific, is expressing animosity toward God. Perhaps the narrator believes in a God, but despises God or at least self-proclaimed God-believers the world over. This is a possible interpretation, one no doubt favored by Christians who are quick to quote scriptural passages like Psalm 14: “The fool says in his heart There is no god.” (Granted, atheists have found their own ancient proof text—to wit, Lucretius in his On the Nature of Things: “Fear is the mother of all gods. Nature does all things without their meddling.”) The other interpretation, which I favor and is probably the songwriter's intent, is that God does not exist, pure and simple. Moreover, the song’s heartfelt anger subtly, I would argue, conveys a sorrow over lack of divine providence in a world run amok. The climax comes at the end, and it packs an emotional wallop when you hear it:

I won’t believe in heaven or hell.
No saints, no sinners, no Devil as well.
No pearly gates, no crowny thorn.
You’re always letting us humans down.
The wars you bring, the babes you drown.
Those lost at sea and never found,
And it’s the same the whole world ‘round.
The hurt I see helps to compound that
Father, Son and Holy Ghost is just somebody’s unholy hoax.
And if you’re up there, you’d perceive that
my heart’s here upon my sleeve. [my italics]
If there’s one thing I don’t believe in…..
It’s you…dear God.

Sarah McLachlan, on a side note, covered this song on an XTC tribute CD. As good covers go, she changed it up a bit, and yet offers an equally good rendition.

Midge Ure’s “Dear God” is more up my alley musically.  True, the chorus is too upbeat for my taste, but his vocals are impeccable and rich; they work well with the music. The atmospheric guitar sounds in the opening verses complement the sense of loneliness and dislocation conveyed in the lyrics. Whereas the XTC song blames God for the evils of the world, Ure’s song beseeches a divine power to help alleviate the ills that humankind has created. Whatever Ure’s religious background, his “Dear God” is a secular tune, not a Christian song. The tone is one of cautious hope, as he cries out for “peace in a restless world.”

Dear God, can you hear me crying?
A whole world crying
Looking for something to say
We had it all and we threw it all away
Is there somebody watching
Somebody watching over the mess that we've made
We're lost and alone and afraid.

So one song blames God for the evils of this world and the other looks to God to heal the world. Both supplications, one irreverent and the other disillusioned, are a valid cri de coeur, in my view. One eschews the Augustinian strain of piety, and the other seems to imply it.  I tend to favor Ure's approach over XTC's, but even C.S. Lewis in his moment of darkness referred to God as a "cosmic sadist."  I can't fault those who express anger at God.  Christianity's answer to the problem of pain is insufficient.  Theologians point to free will: humankind has the freedom to make decisions and not follow the dictates of the deity like mindless robots.  Consequently, the choice for evil will always be at hand.  Late medieval scholastics like William of Ockham tried to explain this with the dialectic of the two powers: potentia absoluta et ordinata.  God has absolute power, but He has deigned to set up a system of secondary causes.  Therefore, God is not responsible, or at least directly responsible, for evil.  However you cut the cake, though, the problem persists: how can an omniscient and benevolent deity allow such suffering in the world?  You can create metaphysical arguments and wander through theological labyrinths all day long and as a theist still be left with this dilemma.

What Perry referred to as "Augustinian," though, really just goes back to the Sermon on the Mount and the Pauline epistles of the New Testament:

One of you will say to me: “Then why does God still blame us? For who is able to resist his will?” But who are you, a human being, to talk back to God? “Shall what is formed say to the one who formed it, ‘Why did you make me like this?’” Does not the potter have the right to make out of the same lump of clay some pottery for special purposes and some for common use?  [Romans 9:19-21]