Last weekend I watched a few episodes of Columbo on Netflix with my daughter Monika. I was pleased that she got into it. It was my favorite show as a kid in the Seventies. My wife half-heartedly watched as well, interjecting a few dismissive comments about the show. She said it plods along and runs too long at 73 minutes. She’s somewhat right, and I only add somewhat because the show is near and dear to my heart in a nostalgic sort of way. Nowadays we’ve gotten used to snappy, quick episodes of 20 or 30 minutes. And an obvious contemporary parallel, the show Monk, which ended its last season earlier this year, got us used to this quick way of doing things. So I recognized what she was saying, and in fact was already thinking it, but I, we, still enjoyed it anyway. Peter Falk is a god, in spite of having been woefully typecast thereafter, and his character is one of the greatest creations of television.

Lieutenant Columbo, Inspector Clouseau, and Monk come from a venerable tradition of the master detective genre that goes back to Arthur Conan Doyle's Sherlock Holmes and Agatha Christie’s Hercule Poirot.  No doubt detective-novel geeks could name a few more sleuths to the list.  But before Sherlock, there was Edgar Allan Poe's masterful creation, C. Auguste Dupin, who appears in three of the writer's stories.  Honestly, I never got into Sherlock Holmes or Hercule Poirot.  Dupin, Columbo and Monk are my personal favorites, and I hope to explain why. 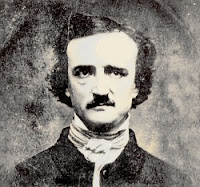 I’m sure cultural historians and film critics have discussed these characters sufficiently, but I don’t care if I reinvent the wheel, for I’ve thought about this for a long time. The fascinating thing about Columbo, as anybody who's watched the show would know, is that he’s the smartest guy in the room and yet he doesn’t look the part. To the contrary, he’s a “rumpled face in a rumpled raincoat” and seemingly disorganized and eccentric. What the viewer learns after a while is that there is more artifice in Lt. Columbo’s appearance and demeanor than mere happenstance.  But his uncanny ability to solve a crime is almost preternatural.  Monk is similar to Columbo in that he has many flaws and is a social misfit with a brilliant mind, but his flaws—namely, OCD and a host of other quirks—are the opposite of the unkempt, cigar-toting L. A. homicide detective.  Finally, let me go back to the beginning, C. Auguste Dupin.  Unlike Columbo and Monk, Poe's detective is not in law enforcement at all, but nonetheless aids the police in solving a series of crimes pro bono.  Acumen is a Poe-like word, and the author indeed uses it to describe Dupin: sharpness of mind.  He doesn't possess any noticeable flaws like the other two, but they all possess acumen.  The demonstration of their intellectual prowess in figuring out a mystery is a joy to read and fun to watch!
Posted by Der Viator at 6:39 PM