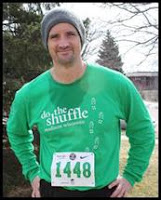 Okay, maybe not so much Vici.  I ran a 10K this morning.  My time wasn't great, but it was respectable for a guy who doesn't usually run a race: 51 minutes and 20 seconds.  Actually, who am I kidding?  My time sucks.  I did a 10K once when I was in Afghanistan, on an airbase, but this is my first civilian 10K.  I hope to participate in more in the future, a 10-mile and "half-marathon" in particular.  I lined up at the front near the starting line where all the serious runners jockey for position.  I knew they would leave me in the dust, these reptilian-looking creatures, largely males in their twenties, with tan, lithe bodies, and lean, muscular legs, wearing the latest running gear.  I felt like something the cat dragged in, sporting the ski cap I bought in Japan, my army PT shorts, and makeshift ankle socks rolled down, not to mention the cigarette in my mouth and the smell of whiskey on my breath.  (Okay, I added the last two, for dramatic license.)  But until the sound of the shotgun, there was a sense of camaraderie.

I must admit it was kind of fun being a part of a large crowd of people who like physical fitness and whose registration fee partly goes to a charitable cause.  I'm the archetypal lone wolf.  I do most things alone, and while I have a few friends that I'll hang with every now and then, I'm pretty much a solo act in my non-working hours.  Yet I enjoyed the spectacle of the crowd and all the hoopla earlier today.  Now I must return to the cave whence I came.  My usual idea of having a good time is reading Edgar Allan Poe, say, maybe sipping some Jack Daniel's, and having CNN or Fox News on in the background.  Yeah, I'm a real party animal...not.
Posted by Der Viator at 12:09 PM