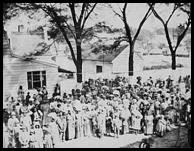 Once in a while I teach a college course on women in American history.  When we get to the 18th century, one of the many colorful historical personages the students read about and discuss is Eliza Lucas Pinckney.  The basic facts of her life are well covered in textbooks.   Put in charge of her father's plantation in Antigua as a teen, Pinckney demonstrated skill as a landhold manager.  When the family moved to South Carolina and her father again left her in charge to pursue political office, Eliza, in a savvy business decision, introduced indigo, a plant that produces a blue dye.  She continued to experiment with various crops throughout her life and managed her husband's properties after his death.  She became a prosperous merchant and entrepreneur in her own right, and she was recently inducted in the South Carolina Business Hall of Fame.  No less than President George Washington was a pallbearer at her funeral.

Fine.  But we're talking about a large plantation in the 18th century, so of course we're talking about hundreds of slaves.  (The photo, by the way, is from a South Carolina plantation during the Civil War, one hundred years after Eliza.)  I've made an observation over the years. Most of my students are white females. I've had few African American female students. And what do they think of Eliza?  They're divided along racial lines. In the past a small number of students have commented negatively on Pinckney as a slaveholder, but most have praised her business acumen and saw her as a role model for women.  This semester I've found that none of my (white) students said anything about the slave issue; they essentially ignored it and praised Eliza for her business savvy and can-do attitude.

I don't want to condemn my students as racists; don't misunderstand me.  Had they all focused on the slavery issue and ignored other aspects of Pinckney's life, to be honest, I would have been equally disappointed in them.  I tell them that as historians—and everyone in my classes are for all intents and purposes historians—we should avoid imposing moral judgments on the people of the past.   I praise students for being able to see someone holistically and not judging them because of one facet of their life.  Should we dispense with Thomas Jefferson, the writer of the Declaration of Independence and our third president, because he owned slaves?  Life experience shows us that when we get to know someone on a personal level, we find that person to be multifaceted, complex, and, as the Greeks had it, somewhere between beast and angel. We tend to assess people based on certain paradigms of what constitutes, say, good and bad behavior, just or unjust actions. We do this, I think, because we try to direct our own lives on the basis of certain values, knowing that this is the ideal and we will fall far short of it. With this experience in mind, we should strive all the more to put aside our value judgments that hinder us from understanding the past. We need to peel back the various layers of culture that separate us from the people of bygone eras.

Yet I'm still somewhat perturbed that none of my students this semester had anything bad to say about Eliza Pinckney.  When I take off my historian's hat I have a different attitude than the statement about objectivity in the previous paragraph.  For example, if there was once a great leader, even a president of the United States, who oppressed and enslaved "my people," I would have nothing but enmity for this person.  I could pay lip service to this historical figure's great accomplishments outside of slavery perhaps, but, honestly, that singular blemish in his or her moral character would be enough for me to condemn the person as a reprobate.  So why should I be surprised if most African-Americans feel likewise?

My students' opinion of Eliza Pinckney just goes to show that ethnocentrism, if not racism, is prevalent among us.  We can't really see beyond the invisible boundaries of race.  Think of the race riots in Los Angeles inspired by the O.J. Simpson trial.  Clearly the man was guilty of these heinous murders and if you ask even an African-American activist, away from the cameras and alone in a room, he or she will agree.  For all our talk and pride about individualism and the pioneering spirit being a quintessential American attribute, we, a nation of immigrants, still think in collectivities, collectivities of ethnicity and race.  My supervisor at work (and readers will note that Der Viator has a third source of income besides part-time academic and military careers), Eddie, is a spry African-American in his fifties who grew up in Arkansas and moved north when he was a young man.  He told me just the other day that he received a letter with the confederate symbol on the stamp.  The person who sent the letter probably had no intention to cause any grief, but caused grief he did.  Are there ways to combat the racism that so envelopes all of us and affects us in ways that we might not yet acknowledge?  Yes, but that's a blog entry for another time.  Suffice to say for now, Eliza Pinckney was a bright woman who adapted to a patriarchal society and held her own, but let us not forget the black slaves under her.  Who wouldn't give just about anything for their freedom?  Nobody.  And those who were benefiting from this evil system, whether they allegedly knew no better or not, certainly don't merit the status as role model.  Am I wrong?
Posted by Der Viator at 8:36 PM