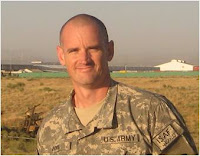 So there I was in the middle of Korengal Valley, crouching behind a rock with only one bullet left. I no longer had a weapon, just one bullet and my wit. I was the last man standing after the enemy had ambushed our convoy. My dead comrades lay all around me. And now ravenous beasts in the shape of men with long black beards, murderous eyes, and AK47s were swarming down the rocky hillside in my direction. How I ended up taking out thirty Taliban, dragging three of my buddies back to the firebase, and acquiring the Army Medal of Honor is still difficult for me to process; but somehow I overcame despair and the odds and lived to die another day.
Would that I had such a tale to tell after serving a year in Afghanistan! Yet I really don’t care about such stories of heroism anymore. I lost a friend over there, and one of my duties included providing vehicles that would transport coffins to the Bagram airport and ultimately to Dover Air Force Base.  Besides, the heroic act of one usually means the death or severe maiming of colleagues. True heroes, like Marcus Luttrell, a Navy Seal from Texas who wrote about his harrowing escape from hundreds of Taliban fighters in the Hindu Kush mountains, do not glory in their exploits; in fact they regret the events that changed their life and would give anything to have their buddies back. My story is much less dramatic, in part because I served in combat support, not combat per se, even if I found myself in a war zone.
Before I discuss my deployment to Bagram Air Base in Afghanistan and thereby conclude this series about my first experiences in the Army, I’ll briefly follow up the story from Part III. From December of 2005, when I completed AIT in Arizona, to December of 2006, when I got mobilized for Afghanistan, I fulfilled my Reserve duty with an engineering battalion in Milwaukee. Talk about a let-down! My “mountaintop” experience at Fort Huachuca met the boring reality of serving in the Army Reserve post-training. I was hoping to employ the skills I had acquired in Missouri and Arizona for the past nine months. I also expected soldiers to be in good shape and attentive to at least some of the rules and regulations. I was sadly mistaken.

What was an intelligence analyst doing with an engineering battalion anyway? Well, as it turns out, just about any kind of unit—combat, engineering, transportation, logistics, etc—needs someone to assess the dangers of an area of operations. The thing is, I didn’t get any further training in this regard while sitting in Milwaukee. The one exception was a three-week field exercise, "Operation Sandcastle," in the spring of 2006 at the U.S. Army’s National Training Center in California. Located at Fort Irwin in the desert, our forward operating base was dusty and dry as hell. I recall driving around in a Humvee in nearly 100-degree weather. At any rate, it was an invaluable experience because I got to brief the battalion commander every evening as the “S2” or intelligence officer.
By 21 December I got word that I’d be going to Afghanistan for sure. Let me give you the context of my deployment.  I had reported to Fort Snelling in Minneapolis a day or two before. What I discovered was that the higher-ups needed an intelligence analyst for a “multi-functional” reserve force that had deployed from Fort Benning a couple weeks prior. It turns out that their intel officer bailed out claiming to be sick or whatnot. Anyway, the Reserve headquarters at Fort Snelling had called up the three intelligence analysts, or 96Bs, that were currently available and ready for deployment. They wanted only one, but they called up three in case they had a tough time getting them to agree to their deployment. I thought one had to go no matter what, but maybe I’m just naïve. At any rate, the other two guys (and they were guys) looked to be in their early twenties. I think they were bitching and moaning about having to go overseas at this time in their life. One of them prattled on about getting married soon or something to this effect. I was so disgusted by these guys shirking their military duty. Sure, no time is a convenient time for overseas deployment, but that's what we signed up for, no?

So I agreed to go without much fuss.  True, the Army Reserve and National Guard traditionally didn’t send troops abroad, but 911 changed all that. Something that an NCO told me also helped my decision. He said that it’s a great opportunity; I’ll be working with a bunch of officers in a nice comfortable environment. As it turns out, he didn’t lie about that. He also said that if I were to refuse deployment now, I might be called up in, say, 3 or 4 months and get a mission that won’t be as fulfilling and safe, such as guarding a tower somewhere or whatnot. To this day I tell people that the Army deployed me and I chose to deploy. Maybe I would have gotten out of it if I had bitched and moaned enough.  Who knows?  But I didn't join the Army in order to avoid service to country.  It also helped that I'd be going to Afghanistan and not Iraq, because I entered the military with the former more prominently in my mind.
I’ve discussed certain aspects of my deployment in a January entry to this blog entitled “Travels to Asia.” I don’t want to rehash what I’ve already written, so I’ll restrict myself here to a couple of fond memories and a few bad ones. I enjoyed the process of gathering and sifting through information throughout the night in order to brief the battalion commander every morning. With the help of the 82nd Airborne's intelligence center at Bagram, I'd track enemy movements and get my stats in order.  I particularly enjoyed working with two ex-Army contractors, Jack and Isaiah; they made the whole experience a much better one for me. The three of us had the right balance of work ethic and play. As long as we were doing our jobs, we’d goof around and have fun. A lot of my fond memories have little to do with my military duties, however. I think about going to Green Beans coffee shop in the middle of the night to have a hot mocha or mocha frappe. Yum. I’m also glad I had the opportunity to teach four courses for the University of Maryland-College Park (European Division).

The only real danger I faced was getting hit by an incoming mortar round or rocket.  The Taliban or like-minded locals would fire them into the air base every once in a while.  They'd take off as soon as possible, though, lest they get incinerated by the fighter jets that would inevitably take off to look for them.  As intelligence offer at a compound on the southeast section of the base, I would report on these attacks.  A fair number of them occurred close to our quarters.  I finally figured out that they were trying to destroy a new air control tower that the Army had been constructing—a tower located only about 300 yards from our barracks.  Fortunately the one rocket that got pretty close to my "container" was a dud.  It made a hole about the size of a softball in a nearby building.

On 26 Feburary 2007 a suicide bomber killed a Korean soldier, an American soldier, an American contractor (my aforementioned friend), and nineteen local Afghans who were scheduled to work on the base.  This attack occurred at about 10am.  Because I work the graveyard shift as an intelligence analyst, I was sleeping at the time.  Vice President Cheney had visited Bagram the previous night, so the Taliban, it appears, were making a statement.
My biggest disappointment was the privatization of the “War on Terror,” not so much in theory but certainly in practice. I can deal with selfish and debauched soldiers here and there. I don’t have a sanguine view of human nature anyway. Moreover, government waste and corruption have been around as long as wars. We’re nothing new in the history of humanity. But I was so disgusted with what I saw. Both private contractors and DOD civilians pranced around, or more aptly sat on their ass, with such an air of entitlement and privilege, and they weren’t shy in informing soldiers about the six figure pay they were reeling in for doing virtually nothing.  Most of these contractors came from blue-colloar backgrounds; the fact that they were suddenly making $150,000 olr $200,ooo per year (albeit on a short-term basis) went to their head.  Should an officer, even a colonel, require them to do something out of their complacent routine, they’d cite their contract: “It’s not in my job description. Sorry."

I don’t want to paint with too broad a brushstroke, and it seems I’m contradicting the previous paragraph in which I express my appreciation for some of the contractors with whom I worked. I think I was operating on the “love the sinner, hate the sin” approach."  Anyway, a few contractors were level-headed, sensitive about their situation, and respectfully taciturn about their income.  I realized that the fifteen or so "green suiters" (i.e., soldiers) who supposedly ran this particular mission at Bagram Air Base were window-dressing.  The Department of Defense wanted things to look like a military operation.  Our compound at Bagram had about one hundred or more civilian workers, and they virtually called the shots.  I could go on and on about this, but I’ll refrain.
Posted by Der Viator at 4:43 PM