What possesses a man to leave civilization for a period of time and go into the wilderness? Most simply want to reflect on the beauty of nature. Yes, they seek communion of a sort with “all living things” or they want to clear their head of the hustle and bustle of urban living. Some hope to draw closer to God and hear His voice in the quietude, an interconnection of the natural and spiritual realms perhaps not unlike the massive white pines that point toward the heavens. Even the most atheistic soul, I should think, can’t resist a mystical feeling while gazing upon the pristine, sapphire lakes and rock facings framed against a coniferous landscape. Others want an adventure and enjoy the physical challenge. Outdoors sports draw many, fishing and hunting above all, allowing young and not-so-young men to test their mettle against the dictates of nature. No doubt there is a multiplicity of factors, and they all were present in our canoe party of nine this past week. 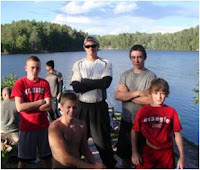 I spent mid July at the Boundary Waters Canoe Area Wilderness in Northern Minnesota, my second trip there. If nature is the theater of God’s glory, as Calvin once wrote, then we traversed a most splendid stage. It’s only fitting that I first introduce the dramatis personae of our group. John, a kindred soul and bon ami, organized the event, as he’s done for some years now. Eric, an amiable fellow and avid outdoorsman, brought to the table three canoes, a keen eye for wildlife, and most notably a servant’s heart. He provided most of the photos that you see.  Mike, a rather laconic traveling companion such as myself, was handy with the fishing rod and seemed to make a catch every time he cast a line. Tim, always an interesting conversationalist, graced us with his presence and brought along four of his sons—Jake, Sam, Gabe, and Nate.

We drove eight hours north in two vans each loaded with two canoes, making an obligatory stop at Culver’s, a burger joint, before arriving in Ely, Minnesota just after midnight. We lodged overnight at a bunkhouse to get some shut-eye, however punctuated by the voices of two boys talking in their sleep. Next morning John took care of business with a less-than-sanguine canoe outfitter staff, getting permits in order and inquiring about water levels and such. I tanked up on free coffee and checked my email one last time on a computer provided by the outfitter. Tim searched out a coffee place and morning paper along the town’s main drag. Before long we were making our way through the winding country road toward launch site 14. 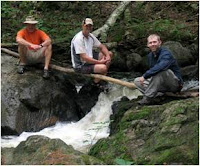 I’m neither a John Muir nor a Sigurd Olson, but I’ll do my best in depicting the spectacular flora and fauna we came across. Regarding the latter, I was hoping in vain to spot a black bear or moose, but we did chance upon a deer eyeing us cautiously along a marshy embankment, a beaver or two shuttling across the lake, a couple of painted turtles on their guard against man and bird, a snapping turtle biting the bejesus out of a smallmouth bass hanging on a line, what we thought might be an osprey, plenty of loons doing their thing, some bald eagles soaring aloft, and no small amount of blue falcons.
BWCAW is essentially a series of lakes connected via portage routes or marshy creeks of varying lengths. For the most part the Canadian border falls to the east and west. Everywhere you extend your gaze you’ll meet an arresting scene of nature’s bounty, from the white and yellow water lilies that decorate the rivers to the huge birch trees that tower over the pines. Once we got on the Little Indian Sioux River we entered a land that time had forgotten, and our hearts grew both adventurous and contemplative the further we paddled. I inevitably imagine myself as part of the Lewis and Clark expedition or Teddy Roosevelt’s adventure on the Amazon, full of wonder as to what lies beyond the river bend. 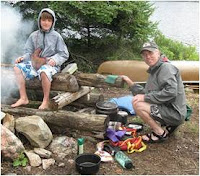 We camped Saturday night on a gorgeous, elevated site off of Loon Lake. Eric had coordinated the food and supplies for Tim and his boys, so his hands were full in teaching them the basics of campsite duties. John, possessing a wealth of knowledge, easily took up his role as an instructor, imparting to the boys what he would call “rustic urbanity,” that is, a different set of rules and attributes that govern the wilderness experience (e.g., courtesy, resourcefulness, respect for nature). The boys wanted to know about my experiences in the Army and asked many questions about the conflicts abroad and military culture. I tried to balance my role as an adult with my need for solitude. For a time I withdrew to a rock ledge at the water’s edge to rejuvenate myself. Eric, bless his heart, stayed up into the wee hours of the night playing cribbage and Bullshit with the boys. 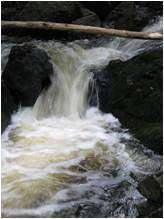 After breaking camp, we had a group devotional and sit-up contest with the boys.  We set out for a more remote area, negotiating the arduous 280-rod portage to Heritage Lake. Our efforts paid off, because Heritage is an emerald tucked away, plentiful in fish and lacking in human primates. The fishermen in our party, namely everyone but me, brought back a couple of northern pike, a bass, and a walleye for a nice feast on the third day of the trip. The boys gathered around as John and Eric filleted the fish. On Monday everyone had a gay old time jumping off a cliff into the lake. The boys spoke in a fake Scottish brogue and Jake, the eldest, impressed even some of us adults with his wit; that’s saying something, for we take humor quite seriously. For the record, I finally had a bowel movement on Monday, and my mellifluous grunts and growls ringing through the forest gave testimony to this breakthrough.  Discussion at the campfire revealed that Tim and I had much more in common than I had thought; our spiritual odysseys, it would appear, have taken us down paths we didn't perhaps think possible in simpler times.

Four days into the trip, Wednesday morning to be precise, six members of the party returned to civilization while John, Eric and I launched out on an ambitious trip that would ultimately involve three campsites, five lakes, and navigation through marshy labyrinths. We had one logistical problem to resolve, however: we had one canoe and plenty of gear. Through trial and error, we eventually arrived at a system that worked. The first trial didn’t wait long. A harrowing moment occurred when we endeavored to porter into the headwinds across Loon Lake. John struggled hard at the stern so that we wouldn’t tip over. We came close, and the experience was a “lowlight” of the trip. 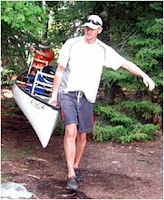 We always enjoy reviewing the highlights of a canoe trip on the way home, even if it’s difficult to settle on just a few experiences. I fondly recall swimming across the lakes, and the higher the watershed, the better, as the lakes got cleaner and more rejuvenating the further we went. Engaging and convivial discussion at the campfire was plentiful. There’s something about embers and the crackle of knotted wood that brings out the philosopher in all of us. Perched on a log before the glow of flickering flames like a couple of cavemen, John and I reflected with fondness on the love between a father and son after overhearing Tim and Nate, his eleven-year-old, wrestling in the tent one evening. Tim’s snoring moments after this rigorous activity, we remarked, sounded like the sleep of the righteous. Eric, John and I agreed that a swim break next to a cove on Steep Lake was just what the doctor ordered after a considerable morning of paddling and portaging with little hydration. It became one of the fondest memories for the three of us. 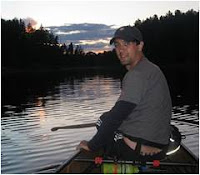 Some of the portages could be a bear and the mosquitoes, godless and unrelenting, took a toll, as my pockmarked appendages still testify; but all in all the solitude, tranquility and verdant splendor that surrounded us compensated us hundredfold for whatever discomfort we experienced at times. We came out of the wilderness five pounds lighter, bristled in the face, kissed by the sun, and more than ready to digest a pizza or two. John has weighed in on the ascetic nature of wilderness camping. We leave behind our iPhones, laptops, and Starbucks coffee and enter an environment that demands resourcefulness, physical stamina, and forethought. We can imagine how are forebears used to live.

Presumably the world we’ve inhabited for seven or eight days still exists outside our experience of it; yet it gradually recedes from our mind as if it were a pleasant dream once we return to civilization. Does this pristine place really exist? There’s always next year to reassure ourselves when we can again launch our canoes and seek to regain paradise lost.
Posted by Der Viator at 6:42 AM