"We Killed God at Magdeburg" 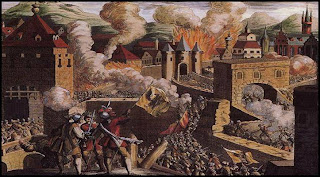 May 20. The heavens darkened on that day, both morally and literally. I’m talking about Germany in 1631. Unfortunately, the siege of a city was never good for the city’s occupants. One thinks of the Roman legions flattening Carthage almost two millennia earlier, or, if we fast-forward three centuries, Japanese troops in Nanking (1937-8) engaged in perhaps the most sadistic and sickening orgy of rape and murder in the annals of the Homo sapiens. Better yet, to bring it closer to home, I could have focused on Charlie Company entering the hamlet of My Lai on that fateful spring day in 1968.  But today’s May 20, and so I’ve selected as the topic de jour the 17th-century destruction of Magdeburg.
Grim-faced, bloodthirsty mercenaries suddenly burst into the pastor’s home demanding money. On this spring evening a paroxysm of wanton killing and looting enveloped the city; and such loathsome and foul activities are silhouetted against the backdrop of a massive fire that ultimately will consume the city and which eyewitnesses from afar will later report having seen (though not knowing the cause thereof). There they stood: ominous, ravenous thug-soldiers, toting their muskets, accustomed to a steady diet of pillage. Only the courage and resourcefulness of the pastor’s wife saved the hapless family from a dire fate. Perhaps they had paid previous marauders for “protection,” for they had nothing left to give. Upon this revelation one of the gunmen aimed point blank at the pastor, but Frau Thodaeus managed to knock the weapon away from her husband’s head just as he fired it. She yielded the silver fasteners of her girdle to satisfy their unappeased demand for booty. This evidently worked, and they went their way. The Thodaeus family was lucky. One prominent eyewitness, Otto von Guericke, a physicist who would disprove the horror vacui hypothesis, wrote that the invaders went mercilessly from house to house threatening to torture, rape, and kill those poor souls who didn’t pay up.

Simon Prinz, his wife and four children barely got out alive. For a fee, a lieutenant-colonel agreed to escort them safely out of the city, but even he had a difficult time persuading sentries at the Sudenburg Gate to let them through. For a time the family had to separate, and Prinz, who had served hours earlier as a gun captain defending the city, found himself in what must have been both a stressful and surreal situation, drinking a toast with Imperial officers in their encampment just to survive.

Jürgen Ackermann, an officer in an Imperial regiment, gives us the invaders' perspective.  Plied with alcohol to man themselves up for the attack, Ackermann and his fellow soldiers were in the initial assault.  Having entered the city with their storm ladders, they didn't waste time plundering, even before it was safe.  "The fighting in the streets, some of which were obstructed with chains, had so exhausted our nine attacks, each by 3000 men, that we could scarcely gasp."  Fortunately for Ackermann, Imperial troops broke through the walls allowing the cavalry to chase after the city's cavalry with trumpets blaring.  According to his account, they were under orders to set fire to homes so that the residents would put away their weapons to extinguish the flames.

The destruction of the Protestant stronghold, Magdeburg, on 20 May 1631 was an especially horrific event in the minds of contemporaries. Considering the fact that the Thirty Years War (1618-1648) was up until that time the worst war in European history in terms of casualties, weaponry, geographic extent, and number of combatants, we should take note when chronicles, broadsheets, diaries, letters, and pamphlets single out an event as particularly disturbing. Most historians agree that Germany took over two centuries to recover from the War, but Magdeburg, one of the largest cities in Germany at the time, became a perennial casualty, as it has ever since been a middling-sized city. I won’t get into the minutiae of this complicated war, but a few background details are necessary.
Though the war had many phases, by the early 1630s the principal combatants on each side were the Holy Roman Empire and Sweden. The latter, under the brilliant tactician King Gustavus Adolphus, the “Lion of the North” and a stalwart Lutheran, hoped to seize territory in Northern Germany and raise the banner of Protestantism. Count Tilly, the Field Marshall for the Imperial Army, laid siege to the city for months, knowing its symbolic importance and its strategic value. Located on the Elbe River, Magdeburg would provide a launching pad for the coming contest against the Swedish army. Moreover, the city had been daring enough to form an official alliance with the Swedes.  On that fateful day in May Tilly’s subordinate commander Gottfried Heinrich, the count of Pappenheim, perhaps against his wishes, stormed the city walls. The attack quickly descended into barbarity 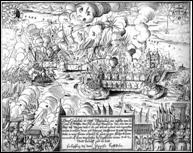 In retrospect Tilly should have known what would happen. The residents of Magdeburg had taunted the imperial troops for months, refusing Tilly's offer of a chance to surrender. Moreover, in this final War of Religion, religious passions and sectarian hate were an extra motivating force for soldiers. The enemy's cruelty, writes Otto von Guericke, was "due in part to their common hatred of the adherents of the Augsburg Confession." The invaders seemed more devoted to Mammon than God, however; every eyewitness account attests to the looting as a priority.  The Imperial army consisted largely of mercenaries from various ethnic groups and nations. They probably had little loyalty to the Emperor. No. It was payback time, and the rank-and-file soldier wanted his due. With fire and sword wreaking their havoc, the loss of life was catastrophic. The evidence suggests that the imperial troops torched the city; 20,000 inhabitants and a number of invaders who didn’t get out in time would perish on that godforsaken day.
I know of only one movie set in the Thirty Years War—The Last Valley (1970)—and would like to cite some lines from it. It’s a movie, not a documentary, but sometimes fiction speaks more to the truth than the facts. A ragtag group of mercenary soldiers decide to take over a village tucked away somewhere at the foot of the German Alps and lay low throughout the rest of the war. Though the flick has plenty of cheesy moments, in the most poignant scene the ruthless, battle-hardened commander played by Michael Caine reflects on the toll of war. A captive who lost his family at Magdeburg asks “the Captain” if he feels close to God in this idyllic and tranquil valley. In a German accent, Caine spits back with furrowed brow some amazing lines and perfectly delivered:
Don’t talk to me of God. We killed God at Magdeburg. We laid that city flat…butchered men, women and children…20,000, 30,000. And then we burned the lot. [Why?] Vengeance. You know, that was vengeance for one of our cities…which was vengeance for one of their towns…for one of our villages, for one of their hamlets…which was probably destroyed in the first place to give some fat little princeling a better view of the Rhine. Magdeburg is that simple….We all have things we would like to forget. Magdeburg is mine.

So what did the sack of Magdeburg accomplish?  In the short-term it hurt the Holy Roman Empire, for some of the Protestant princes who had been unwilling to side openly with Sweden overcame their reservations.  The destruction of a city that had stood against the Emperor's forces a century earlier weighed heavily on Protestant Christendom, and broadsheets and songs called for vengeance.  With the same technical savvy that had spread the Reformation far and wide in the 16th century, Protestant printers got the word out.  Unfortunately, the massacre of a garrison or small town was par for the course in European warfare before the modern era.  Never mind that the great conflagration that probably killed most of the people on that day was probably an accident.  The destruction of a great city like Magdeburg was an anomaly, but the "land of poets and thinkers" would not really know the meaning of destruction until a few centuries later.
Posted by Der Viator at 5:36 PM