This second week of the basic officer leadership course involved BRM, or basic rifle marksmanship. Tuesday was a boring day in the classroom.  Starting Wednesday, however, we got bussed out to  a makeshift firing range to “zero” our weapon in 97-degree weather. “Zeroing” involves adjusting the front and rear sights posts of the rifle based upon shot groupings on the target. The idea is to have your weapon accustomed to your shooting idiosyncrasies before you get on the qualification range.  After shooting we'd retreat to the tree line for a modicum of shade and wait, and wait, and wait, while other soldiers took their turns at a target. 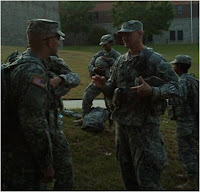 Today marked the culmination of our efforts earlier in the week; we went to the qualification range to “qualify.” Who knew?  I’ve never fired an M4 rifle until this week. The discharge has a bit more bite to it than an M16. Also, I’ve been qualifying with the M9 pistol, not a rifle, for this past year and a half. However, despite some difficulties grouping my shots and zeroing, I got a first-time go on the qualification range. Qualification essentially means that you hit at least 23 out of 40 pop-up targets. These targets appear anywhere from 50 to 300 yards away.  You fire thirty rounds in the unsupported prone position and ten rounds in the kneeling position. I’m not the most skilled shooter in the world, so the fact that I qualified the first time with 24 was gratifying. Many soldiers had to re-qualify, sometimes more than once or twice.  Keep in mind that none of us are training to be combat infantry; we're all in the Adjutant General branch of the U.S. Army.  In my own defense, the Army has already changed some of the techniques it had been teaching me for the last five years.  For instance, the position of the legs and feet is different now, and they advocate a different trigger squeeze technique.  Also, they used to forbid the usage of the magazine to stabilize the rifle onto the ground; now they require it!
We had a rather inauspicious and funny beginning to our day this morning. The RSO, or Range Safety Officer, drives up in his shiny white Dodge pickup cranking hip-hop as if he were in the hood. He’s a first lieutenant and should know better. Anyway, he gets out of his truck and starts talking smack with soldiers; five minutes later his truck is rolling down the road without him. It was quite a sight to watch the safety officer chasing after his vehicle.  On a more positive note, the cadre and civilian contractors provided superb training and demonstrated commitment to the soldier.  I'm living testimony that you can teach an old dog new tricks :)
Posted by Der Viator at 3:15 PM