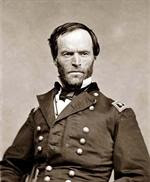 To this day southerners have not forgiven, let alone forgotten, Sherman’s invasion deep into the heart of the Confederacy in 1864. At the time, Ella Gertrude Clanton Thomas, a plantation mistress, watched with horror atop the porch of her manor as Union soldiers set ablaze the only world she had known.
General William Tecumseh Sherman, a Midwesterner who thought African Americans were inferior and who seemingly harbored a genocidal hatred for Indians, once boasted, rightly it turns out, that he did more for the liberation of slaves than anyone else. He firmly believed that Union forces had to take the war to the South to destroy the economy, infrastructure, and morale of the Confederacy. The turning point in the war had already occurred with the battle of Gettysburg in 1863. But over a year later victory was far from complete. The war could have dragged on for years, as in World War II when Nazi Germany and Japan continued to fight another two years even though their ultimate defeat had been assured by the fall of 1943. The U. S. Presidential election and with it the future Northern commitment to the War was at stake.
The carnage of war in battles like Shiloh and Antietam had horrified Sherman. While Grant would continue to use the North’s superiority in numbers to charge en masse in bloody head-on assaults, Sherman sought a way to end the war quickly and at the same time reduce the slaughter of civilians and enemy soldiers. His campaign of total war did not endear him to the South, but it probably did more to end the conflict than Grant’s conventional warfare or the dwindling of Lee’s resources. He virtually destroyed the plantation system of the South and added almost 20,000 slaves to the Union forces along the way. The occupation of Atlanta in the spring gave a great morale boost to the North and guaranteed a second term for the president. If Atlanta falls, Mary Chestnut wrote, “the game is up.” After destroying the city, Sherman’s Army of the West continued its march to the sea and was able to offer Lincoln a Christmas gift, Savannah.
Angered, Ella Thomas resolved to write the wife of the perpetrator, but decided not to publish the following letter when she heard about the recent death of Mrs. Sherman’s infant child.
Mrs Gen Sherman—A few days since I read your husband’s farewell telegram to you dated Atlanta. Will you believe it? for a moment I felt sorry for you. Forgetting who you were and for what purpose he was coming among us my heart went out in womanly sympathy for you. He bids you expect to hear from him only through rebel sources and urged by the same womanly intuition which prompted me to sympathize with you, I a rebel lady will give you some information with regard to Gen Sherman’s movements. Last week your husband’s army found me in the possession of wealth. Tonight out plantations are a scene of ruin and desolation. You bad him “God speed” on his fiendish errand, did you not? ...and this you did for what? to elevate the Negro race. Be satisfied Madam your wish has been accomplished. Inquire of Gen Sherman when next you see him who has been elevated to fill your place? You doubtless read with a smile of approbation of the delightfully fragrant ball at which he made his debut in Atlanta? Did he tell you of the Mulatto girl for whose safety he was so much concerned that she was returned to Nashville when he commenced his vandal march? This girl was spoken of by the Negroes whom you are willing to trust so implicitly as “Sherman’s wife.”