Banality of Evil at the Box Office 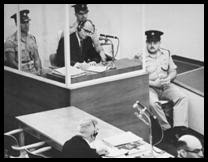 Social scientists are familiar with the term banality of evil. German philosopher Hannah Arendt, reporting in 1961 for The New Yorker, coined the phrase after witnessing the trial of Adolf Eichmann in Jerusalem. Eichmann had evaded authorities for well over a decade after the destruction of the “Third Reich,” hiding out in Argentina until the Israeli government, in conjunction with German officials, captured the fugitive. He was the Nazi expert on Jewish matters. His role in the Wannsee Conference of January 1942 and in the deportation of Hungarian Jews in 1944 made him one of the most evil men in modern history. Eichmann’s appearance and demeanor in the courtroom struck Arendt as that of an ordinary bureaucrat.

Historians and philosophers have debated her meaning of the phrase. As far as I can tell, she was making the observation that evil in our age does not stem from blood-spitting demons emerging from the pit of hell; rather, seemingly ordinary, plain-looking people sitting in an office somewhere, crossing Ts and dotting Is, perpetrate nefarious deeds. That’s a profound observation, one that we take for granted nowadays. We all know that, while murderers can look like crazy-eyed, swastika-stamped and shaggy-haired Charles Manson, more often than not they seem like amiable, personable and fairly attractive individuals à la Ted Bundy or Scott Peterson. Some historians have suggested that Arendt’s conception of evil doesn’t really fit in the case of Eichmann, who successfully deceived her with his courtroom persona. I’ll address this critique at the end.

Presently I would like to relate her observation to modern culture more broadly. Arendt’s intriguing description of the Nazi criminal and his wartime activities, I submit, was part of the zeitgeist. At about the time of the trial, more or less, writers and filmmakers had begun to explore the disturbing implications of the banality of evil, even though they didn’t use Arendt’s term. Cultural references in the era of Vietnam and Civil Rights were becoming more subtle and complex; the guys in black hats were quite capable of good deeds, while the guys in white hats could be naughty little monkeys indeed. I’m not arguing that this nuanced (and realistic) understanding of good and evil was brand new come 1960—a nice round date that I’m using as a turning point. Nonetheless, less mythologized portrayals of evil, shall we say, had become more prominent in modern cultural representation by the end of the 1950s; the contrasts between good and evil were becoming less sharp. I’d like to address banal depictions of evil in filmography as a case in point.

If you’re an old-black-and-white movie buff, you’ll disagree with what I’m about to write. Truth is, with a few exceptions I’m not a big fan of movies before, say, 1960. Why? I’m one of those odd balls who likes art to capture life’s nuances and complexities, the vast Sea of Grey, otherwise known as reality. Earlier films often featured actors speaking stilted lines in projected theater-playhouse voices and with exaggerated gesticulations. (I can forgive these filmmakers for the obviously fake backdrops; they had limited technology in the days of yore.) Even the great actors of this era were not averse to bringing their thespian approach before the camera. I can’t blame them; they were working within the limits of the thinkable. Moving film had been around for only a few decades and actors by default brought a stage performance to the part. Charlton Heston’s The Ten Commandments (1956) is entertaining, but Paul Newman’s lesser known Exodus (1960), a different  story about Hebrews seeking refuge 3,000 years later, is a more realistic portrayal of the human condition. Moreover, I’ll take a Clint Eastwood, in either his cowboy or street detective mode, over a John Wayne, in his cowboy or Green Beret persona. The former actor portrayed ambivalent characters that either do bad things for the ultimate good or perform good deeds with dubious motivation. The latter, the Duke, is the good guy without complications, ready to right wrongs with a quick draw from the holster and thereby confirm the simplistic and reassuring dichotomy of a Manichaean universe.

Let me focus a bit more on cinematic depictions of evil. In the genre of horror, for instance, Psycho (1960) presented a nice guy you could bring home to the folks, ostensibly, but in reality he was a deranged, knife-wielding murderer suffering from some kind of my-mommy-abused-me complex. (Admittedly, the B-movie The Bad Seed (1956), which I’ve enjoyed for its message despite terrible acting and a marred ending, anticipated Psycho’s theme of evil in a pleasant guise; then again, we’re only four years away and still within the temporal margin of error.) Another flick, Judgment at Nuremberg (1961), was to my knowledge the first movie to take an honest look at the Holocaust; more generally it dealt with the complicated theme of good turned evil with a heavy dose of realism. Its focus on the trial of judges for war crimes further challenges conventional notions of good and evil. Those who are supposed to be the paragons of justice are sending political prisoners to their deaths unjustly. Sci-Fi television shows and movies like The Outer Limits or Alien begin to show not merely goofy green people attacking humans but a future in which human depravity and corruption taint what movies once presented as pristine and septic outer space. (By the way you could view George Lucas’s Star Wars as a depiction of caped crusaders crossing swords, or light sabers rather, in a simplistic world of good and evil, as is typical among dismissive film critics; or you can interpret the movie as a mythos-driven story that offers a nuanced portrait of the good and evil commingling within all of us.)

Of course the reality existed before the media or popular culture came to terms with it. After all, there was a real psychopath named Ed Gein, on whom Hitchcock’s fictional character Norman Bates is partially based; and a very real Holocaust entailed medical doctors, judges, and a host of banal bureaucrats committing horrific acts. So Arendt’s phrase put a nice label on a phenomenon that people understood, but the cultural depictions of banality wouldn't come to the fore until a decade or two after the Second World War.


I’m not a trained movie critic by any stretch of the imagination; I’m not even what you’d call a movie aficionado. As my references indicate, I tend to gravitate toward historical fiction or horror as movie genres. My observations are impressionistic, self-confessedly subjective, not the result of any exhaustive study. And before you start crying out titles like Citizen Kane and Gone with the Wind, let me acknowledge that, yes, great movies existed before 1960.  Nonetheless, I still contend that films that appeared between, say, 1960 and 1980, took on the various shades of grey in more creative ways and with more poignant effect than did the era of Clark Gable, Spencer Tracy, and Marilyn Monroe. 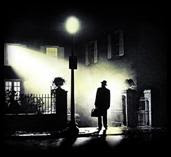 Suffice to say that the hero of the movie in our current day will likely have a dark side; in fact, box office sales might suggest that we demand our good guys to be flawed and (to a lesser extent) that villains have some redeeming qualities. I think one of the most poignant examples of this moral confusion—and I’m again revealing my movie preferences—is the promo poster for the movie The Exorcist, in which a lone dark figure in the street, the priest who has come to expel the demon from the girl’s body, is contrasted with light emanating from the possessed girl’s bedroom where the demon lurks. Director William Friedkin, inspired by Belgian surreal artist Rene Magritte, turned conventional motifs on their head.
Let me return to Eichmann, or at least Arendt’s conception of him. Endless controversies emerged over the banality of evil. For my part, I’m not so sure authorial intent is crucial here, for the phrase has taken a life of its own whether or not Arendt intended it that way. Did she think that Eichmann was normal or average or commonplace or more cunning and vicious than her phrase implies? As it turns out, Eichmann might not have been as banal as Arendt perceived him to be. He writes:
I lived in this stuff, otherwise I would have remained only an assistant, a cog, something soulless…To be frank with you, had we killed all of them, the 10.3 million, I would be happy and say, Alright, we managed to destroy an enemy.
Eichmann, I believe, must have been spitting blood like a demon while he uttered these words.
Posted by Der Viator at 10:30 AM